Once again, I’ve been too long in writing.  This is a blog I wrote on the plane back from Taipei.  Since I wrote it, I felt like might as well publish with the pics for whoever is interested. Here we go:

____________________________________
Well it’s been a while but my God the things that have been going on.  Where to start.  I finished Killjoys but just as I did, I was asked to be in the cast of Porgy and Bess: In Concert for Soulpepper.  For clarity, we didn’t sing specific roles. We sang a variety of the songs – sort of the greatest hits – and there was a narrative written that talked about the making of the original show.  But what a joy to work with this cast.  It’s one of those shows where I can’t believe these crazy, talented people are also my friends – Troy Adams, Neema Bickersteth, Alana Bridgewater and the  wonderful Jackie Richardson.  We had a ball.  And the show did really well.  I don’t know that anyone thought it would sell so well.  So great to sing that material.

And while we were running Porgy and Bess, I was offered the craziest gig.  A new music piece called Charlotte: A Tri-Colour Play with Music.  Someone had to leave and I replaced him in rehearsals.  So I was basically learning the score and rehearsing at the same time.  We rehearsed for 2 weeks and then had 3 performances for Luminato (1st time I’ve done anything for Luminato which is cool) and then a week later . . . . went to (drum roll) ….. TAIPEI.  So crazy. But amazing.  As I’m writing this, I’m on the plane back from Taipei.

So let’s talk about Taipei.  I loved it.  It was amazing.  I love it.  It’s busy and gorgeous and hot.  It was +40 every day with the humidity.  So not gonna lie, almost died of the heat but every building is air conditioned so if you can make it to the next building . . . you’re golden.  But seriously, the rich of China left when Mao took over, apparently, and brought all of their money so Taipei has culture and arts and museums and galleries – a plenty.  Plus it’s tropical so it’s like a big city in a tropical jungle.  LOVED IT!!!

I was rehearsing and performing so I didn’t get to see as much as I would have liked but I managed to get to the National Palace Museum which was beautiful. Artifacts basically – furniture, brass works, calligraphy – not gonna lie, there were two rooms of calligraphy and though beautiful . . . it’s calligraphy . . . two rooms? . . . bless.  Anyway, jewellery, sculpture, etc.  Gorgeous. 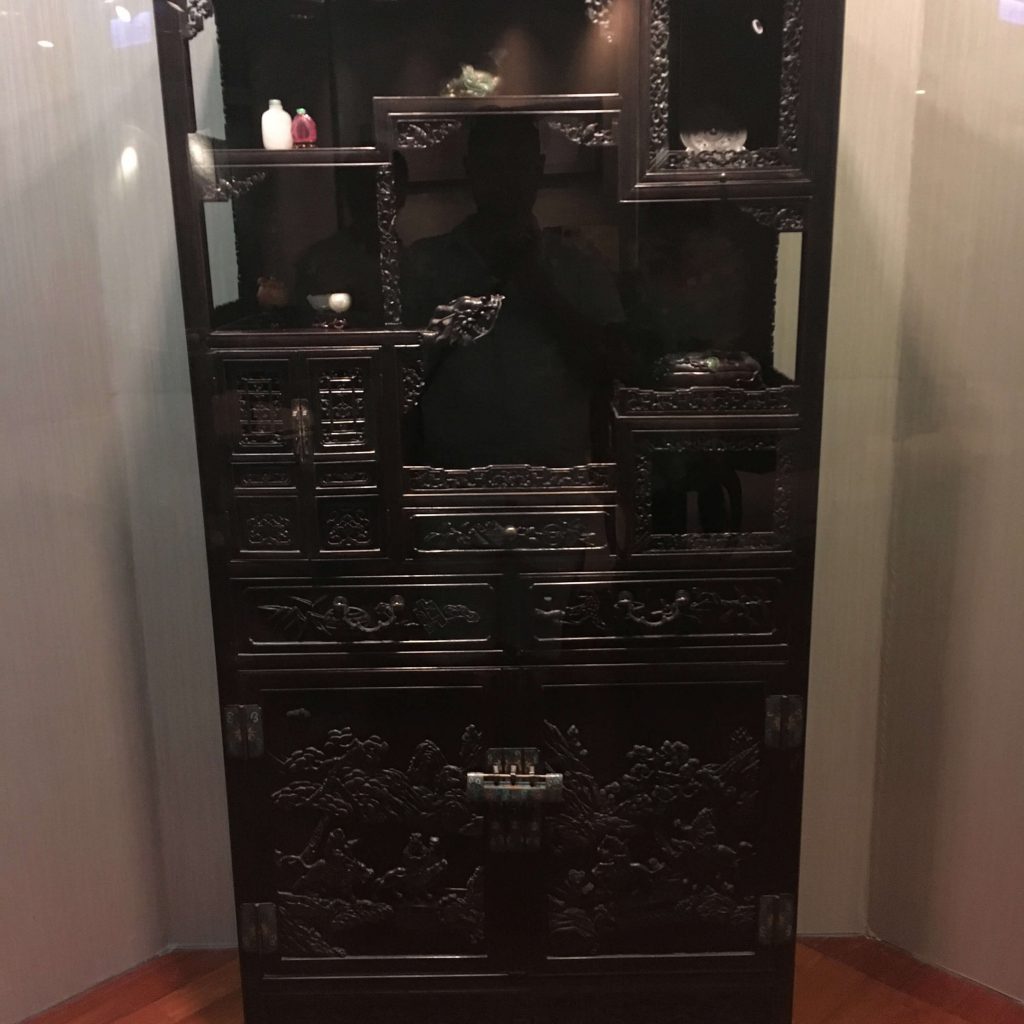 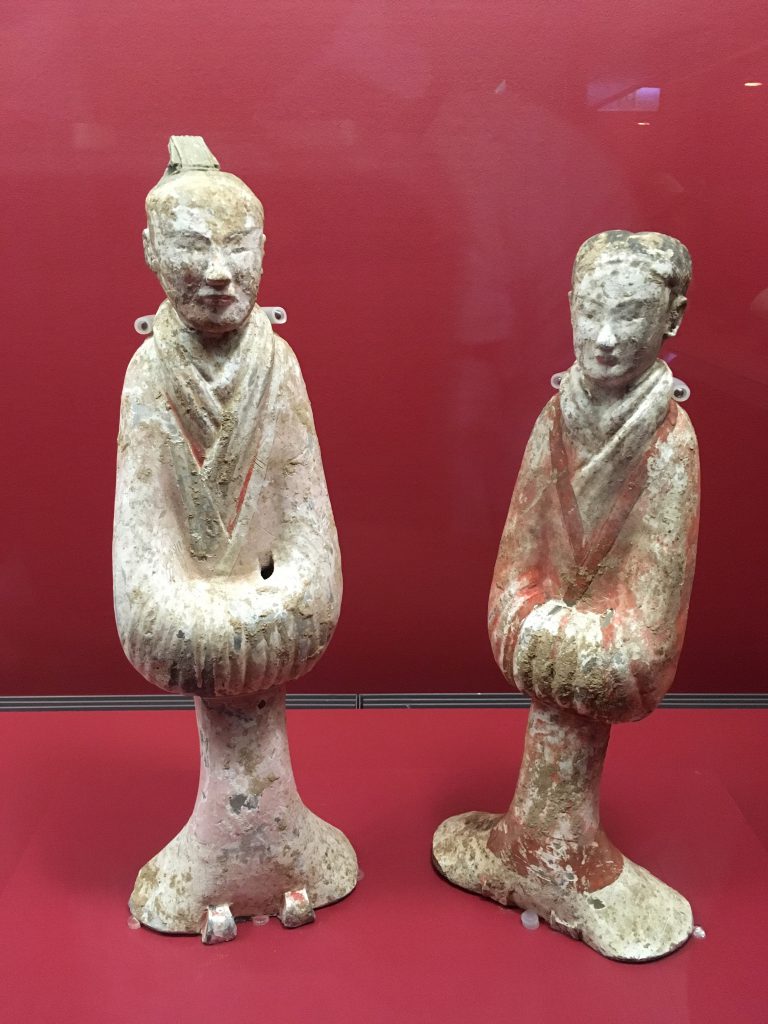 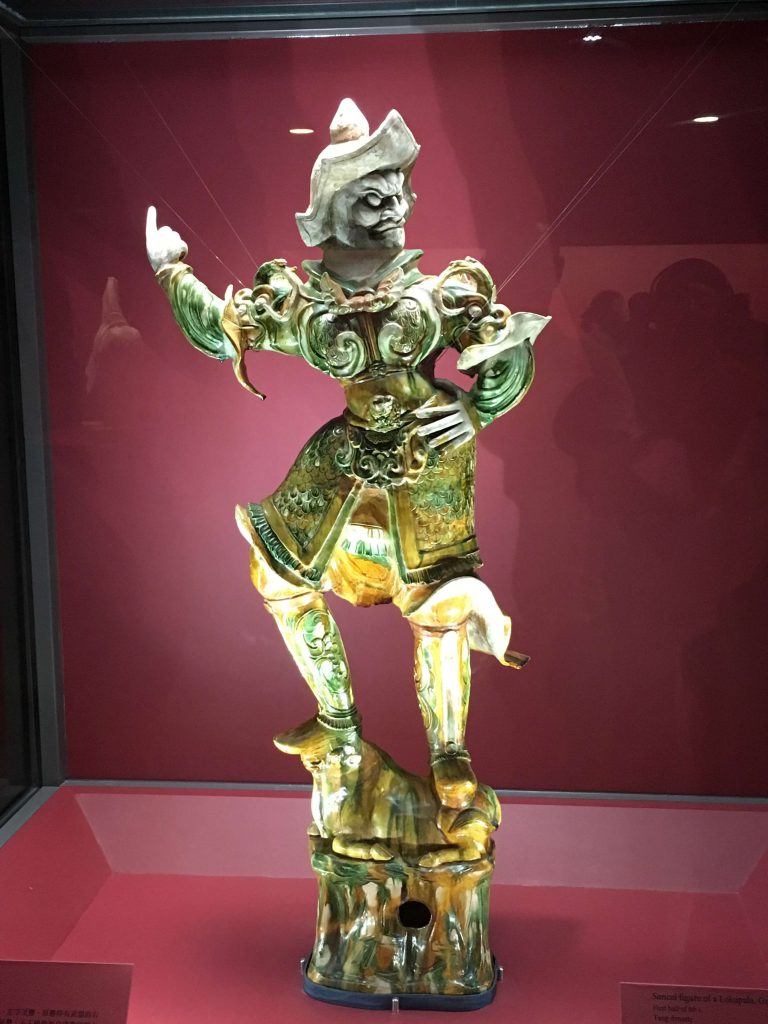 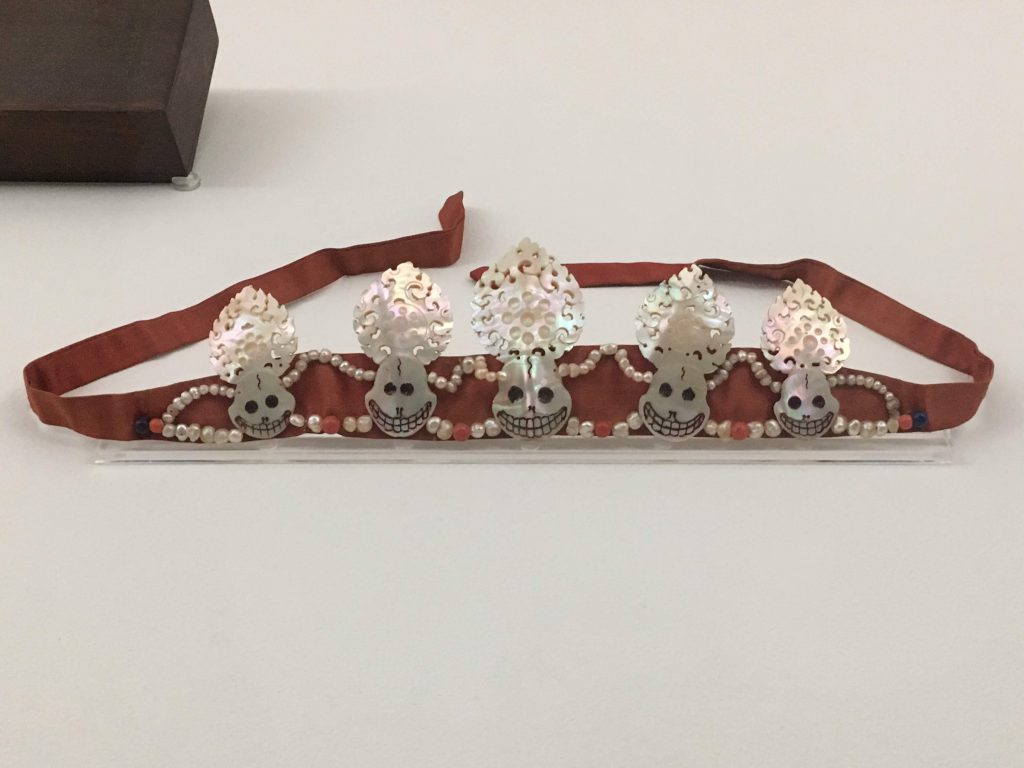 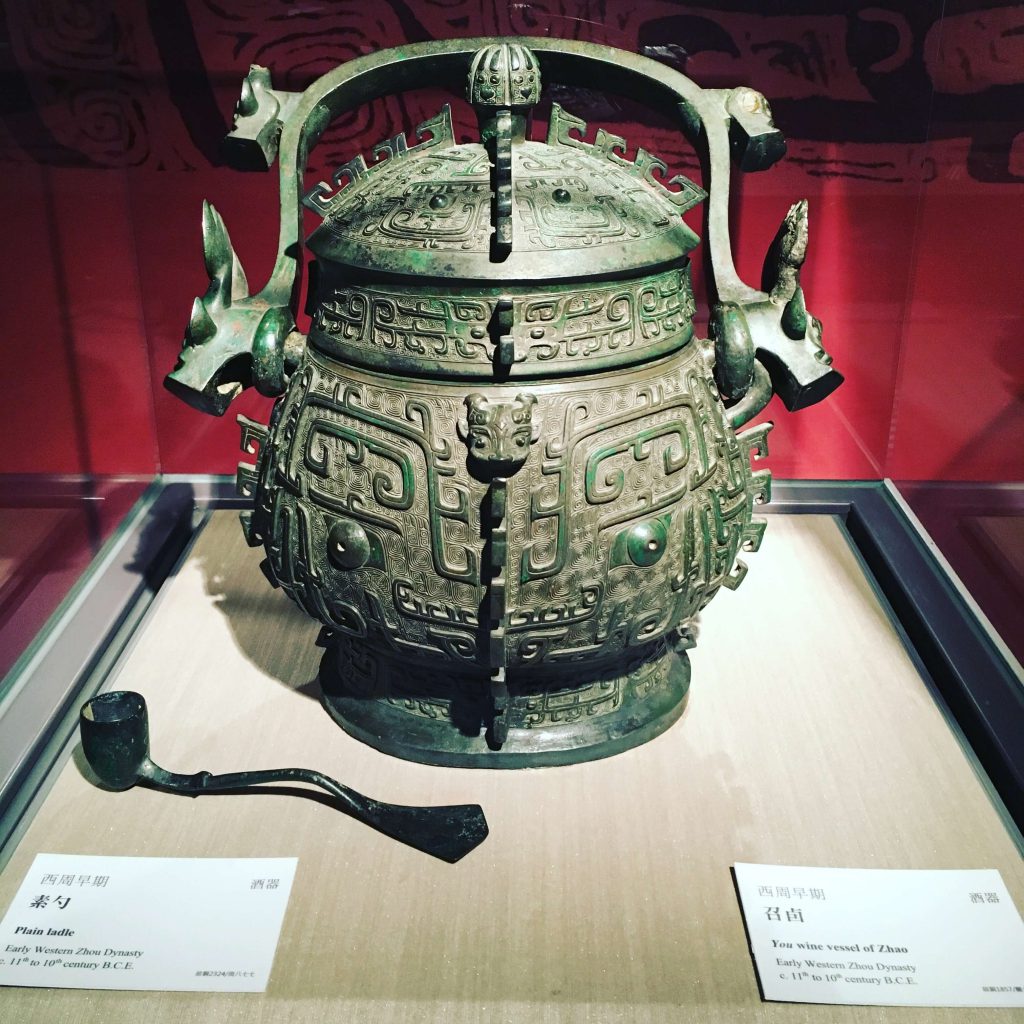 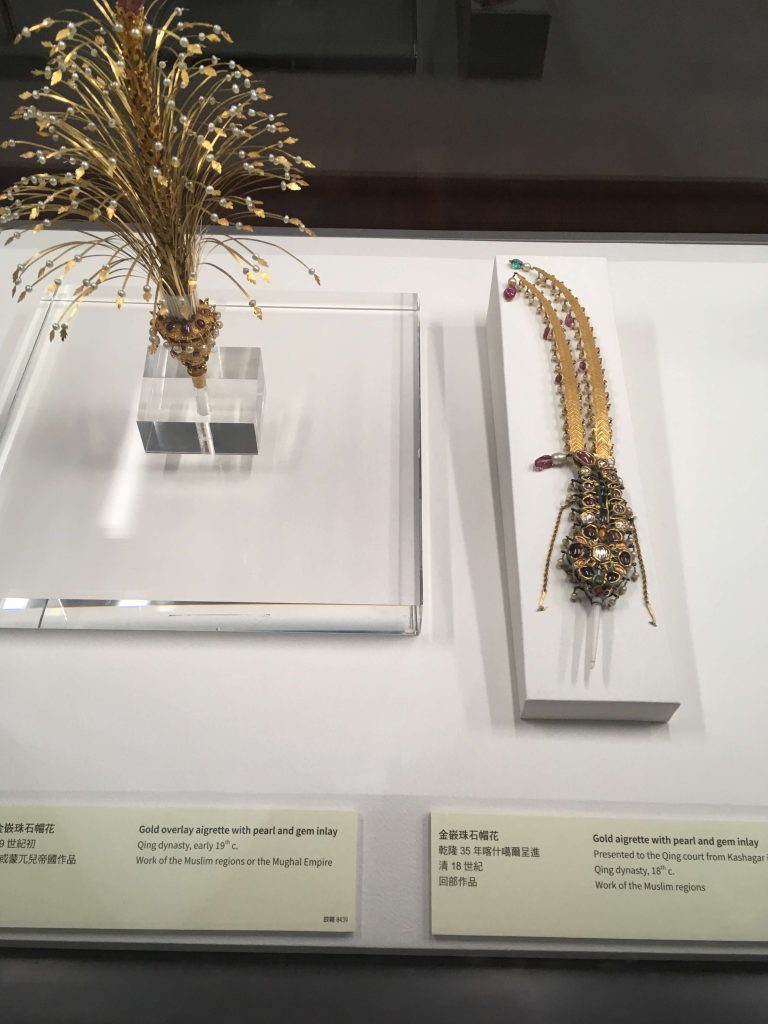 I also got to go to a night market.  Basically that is exactly what it sounds like.  It’s a market that is open at night.  There are several of them.  You can buy knick-knacks, food, clothes, ext. We went to one on our first night and it was fantastic. It’s got a carnival feel, which I always enjoy. Not like jugglers and cotton candy and midgets.. sorry, carnies…sorry, …where was I?? .. oh yes, carnival, right. No, it’s great – lights and people and food and carts and people hawking (sp?) wares.  (SIDEBAR: for years, I thought that sp? meant Spanish and I didn’t know why……aaaaaanyway) Here are a couple of pics. 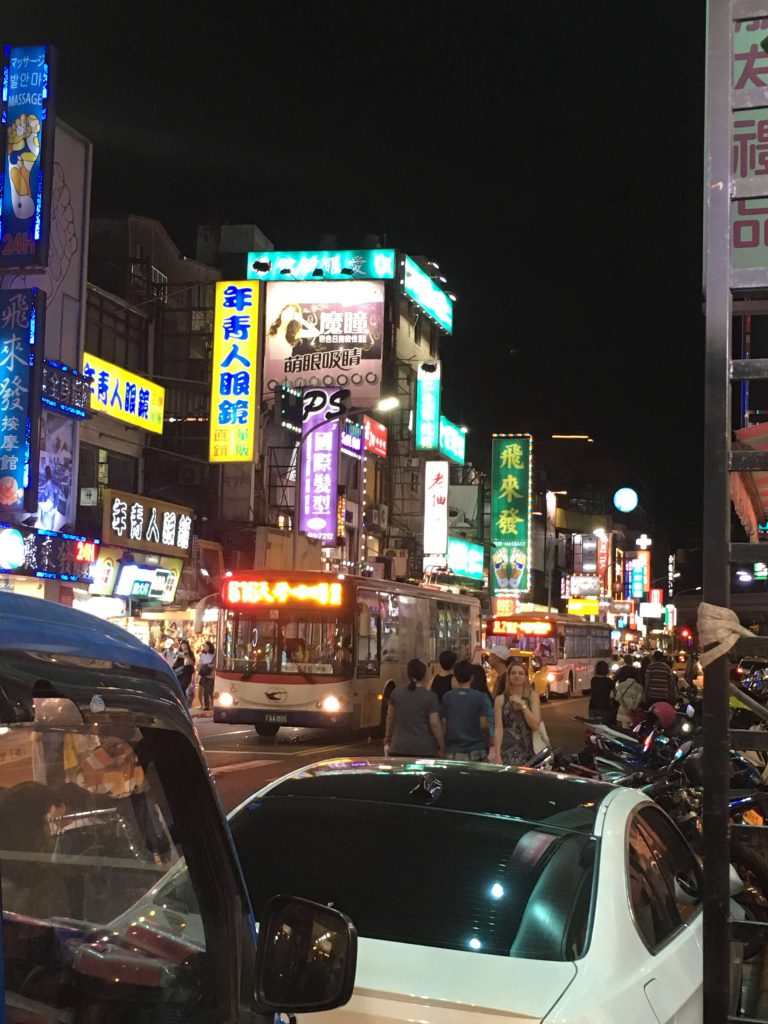 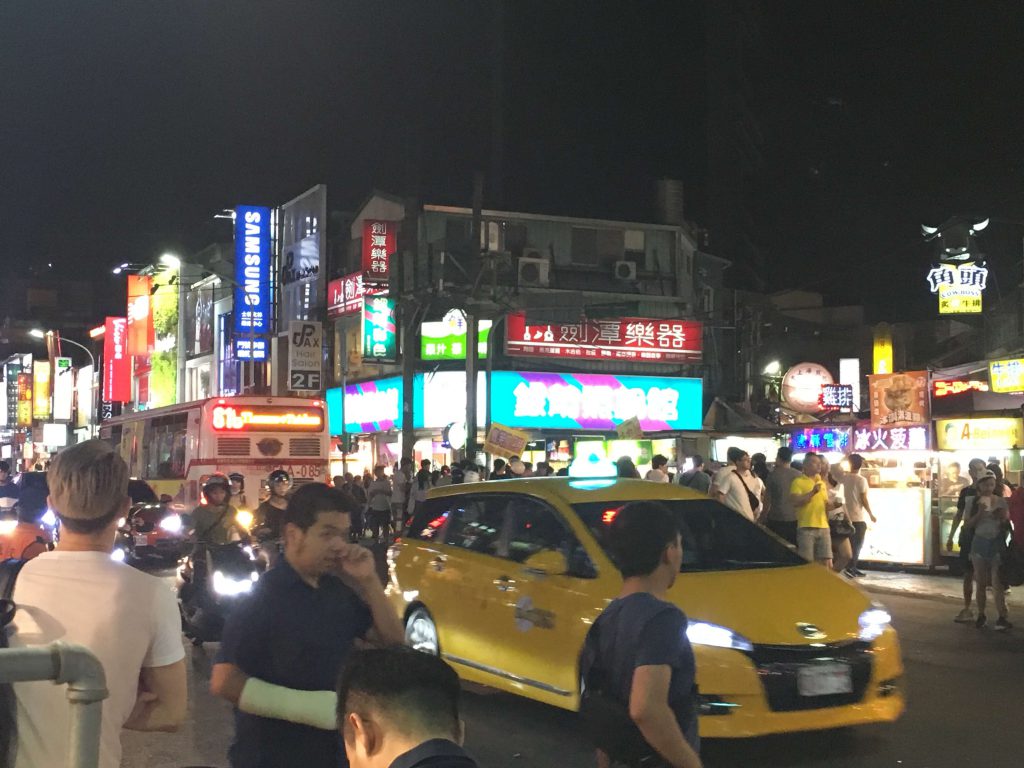 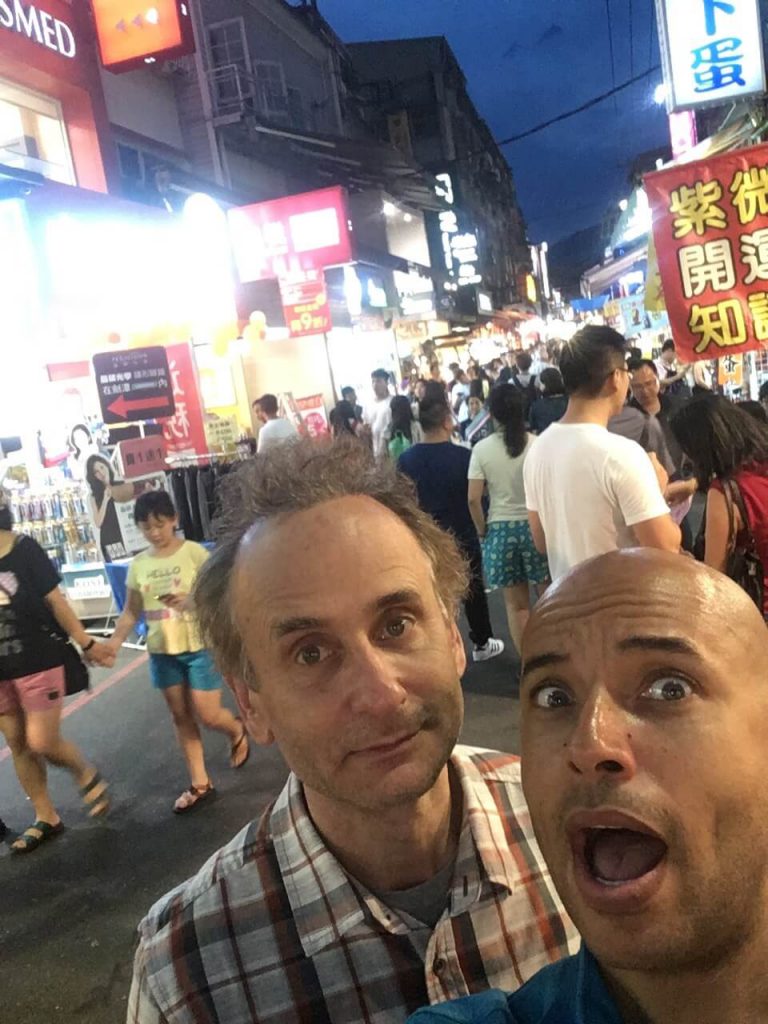 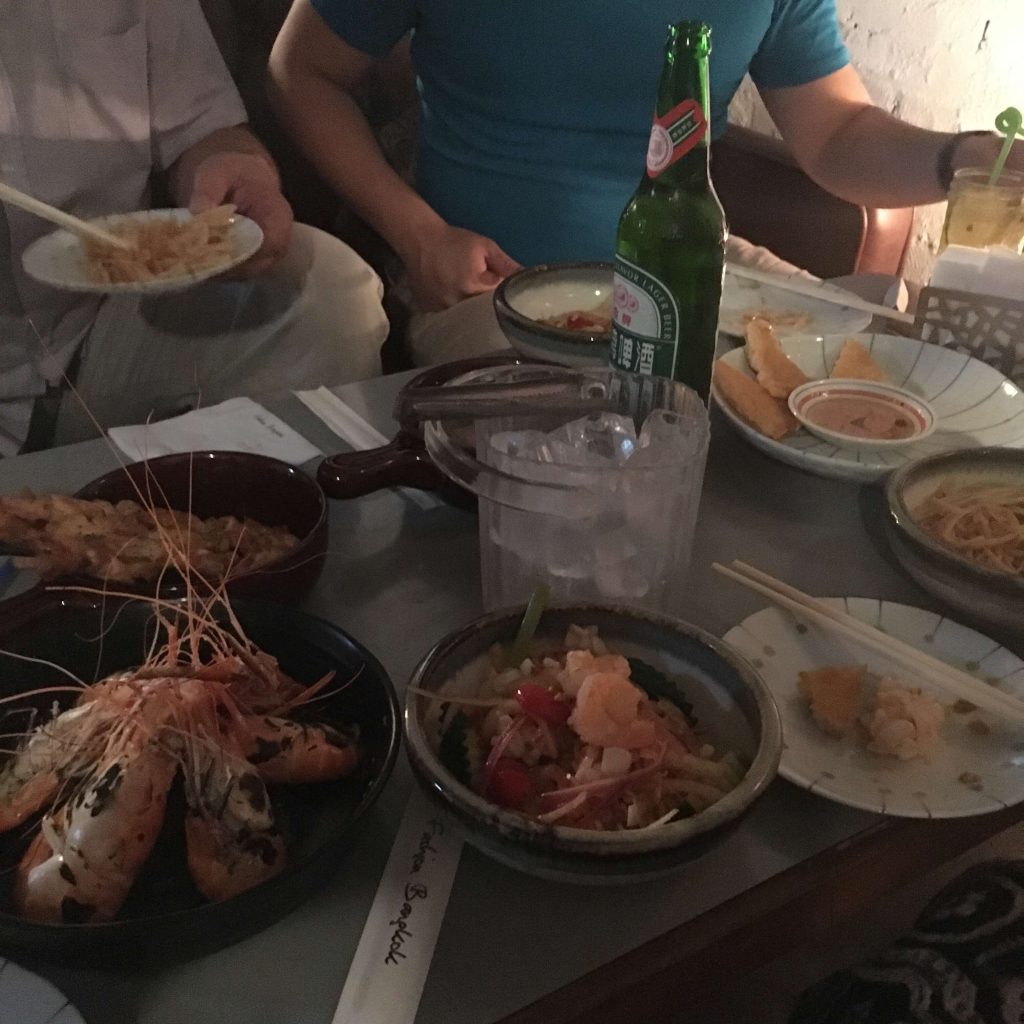 Dinner in a Thai restaurant on our first night.  Crazy scrumptious. 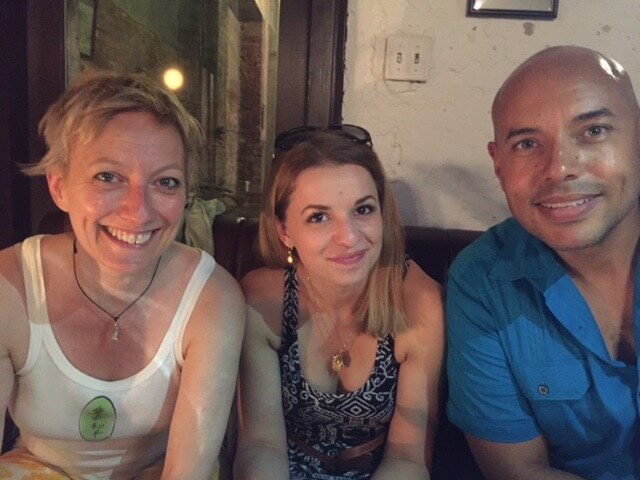 The company of the show and musicians and movement director and stage manager.
And I also did some walking around.  One of the many things I enjoy about Taipei is all of the alleyways that seem like they are just alleyways but are actually meccas of shops and restaurants and spas and and and.. It’s astonishing.  Rarely did I see an alley that was actually just an alleyway.  There would invariably be some sign inviting you to a culinary experience or something store selling designer umbrellas or a place that has massages or selling teas or some other glorious thing. 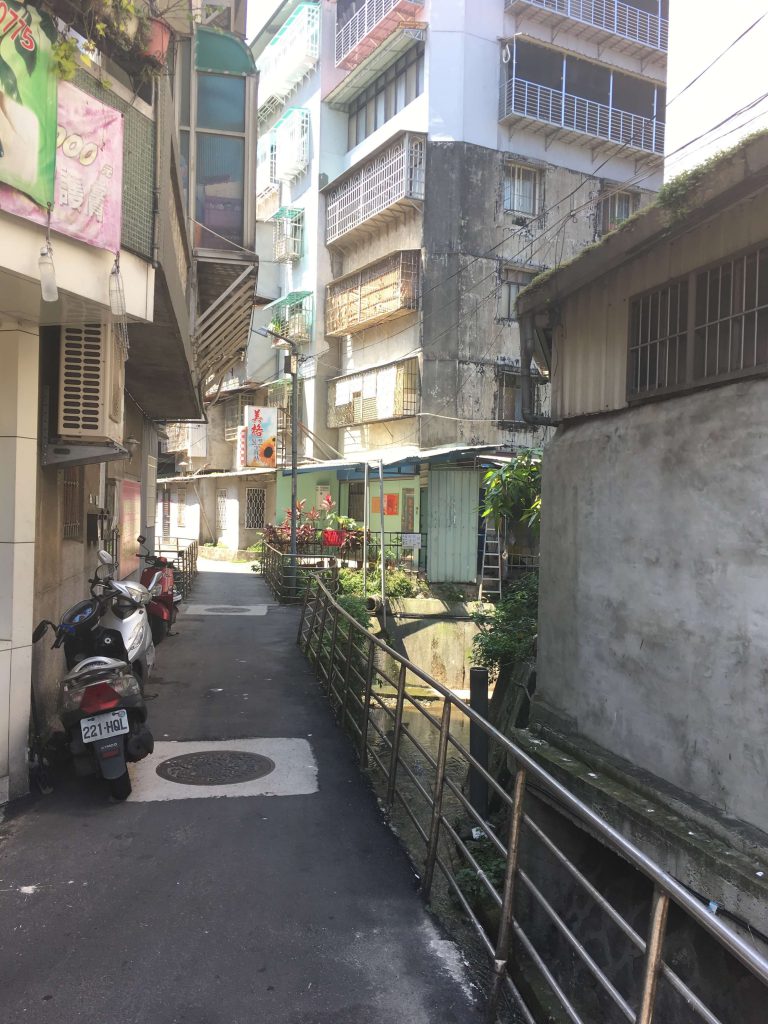 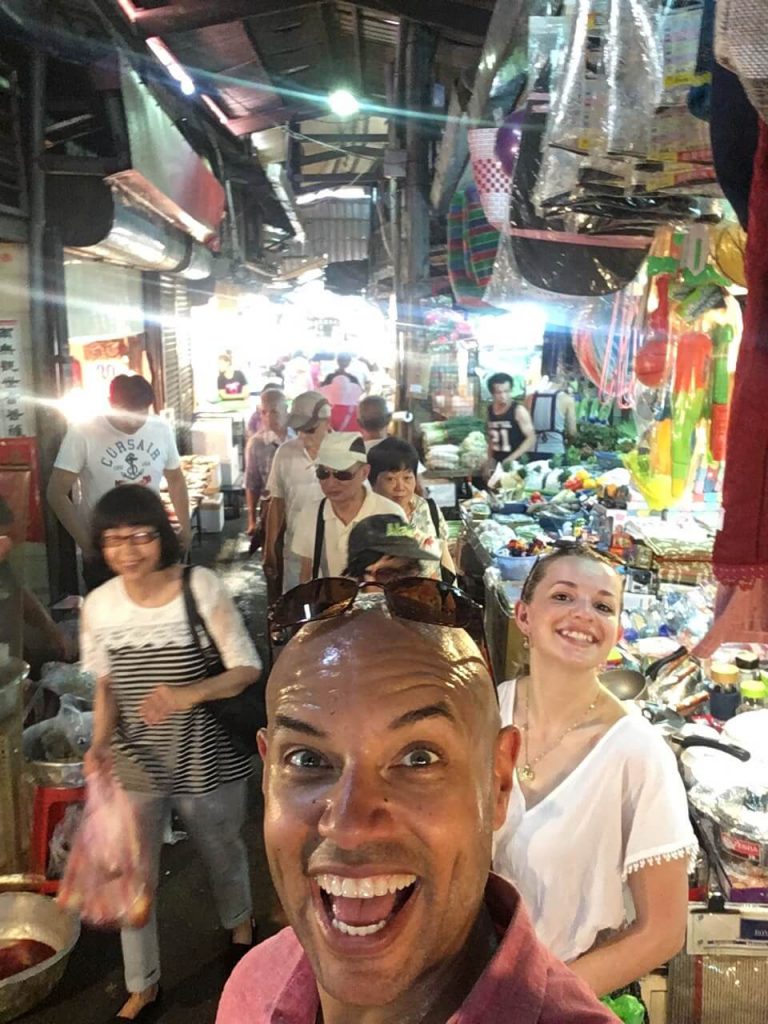 I was told about a flower market that is only open on the weekends which I managed to go and see. I was told it was big but I was not prepared for the shear size of it.  It was about 2 city blocks long and they block off two whole streets and it’s in the middle of the street. Every flower and plant and tree and basket and tchotchke you could imagine was represented. Like the United Nations of Botany.  And so stunning.  The colours and smells and shapes and sizes.  It was a little overwhelming.  I didn’t stay long but long enough to get a few pics and the general idea.  So happy I went to catch it. 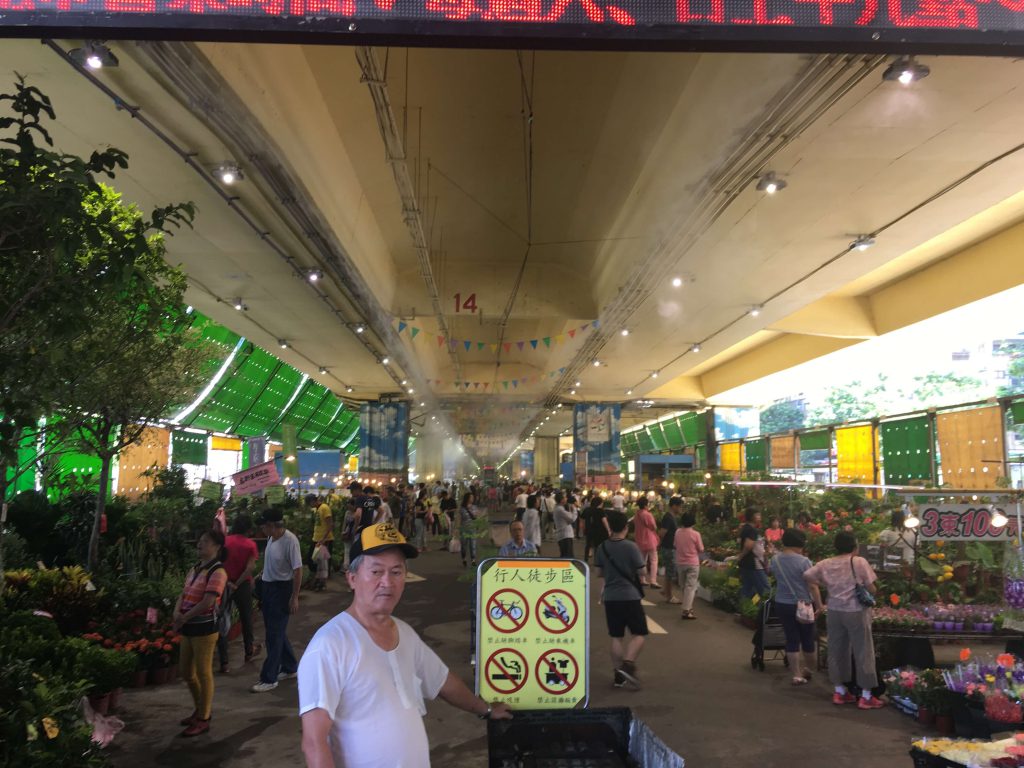 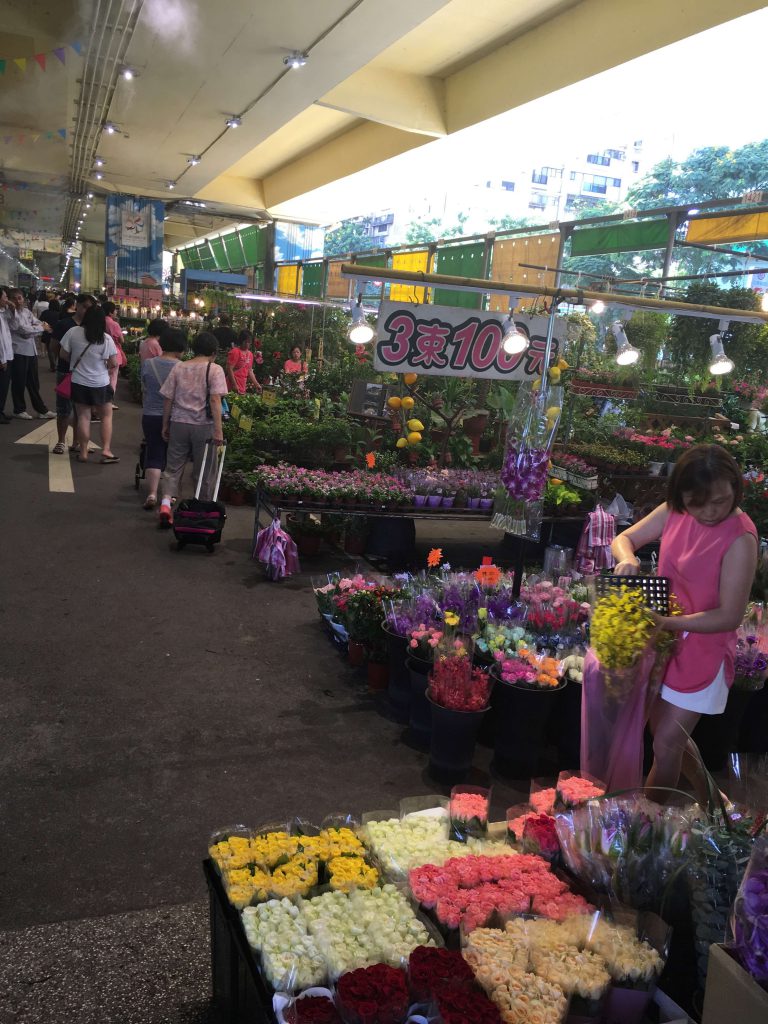 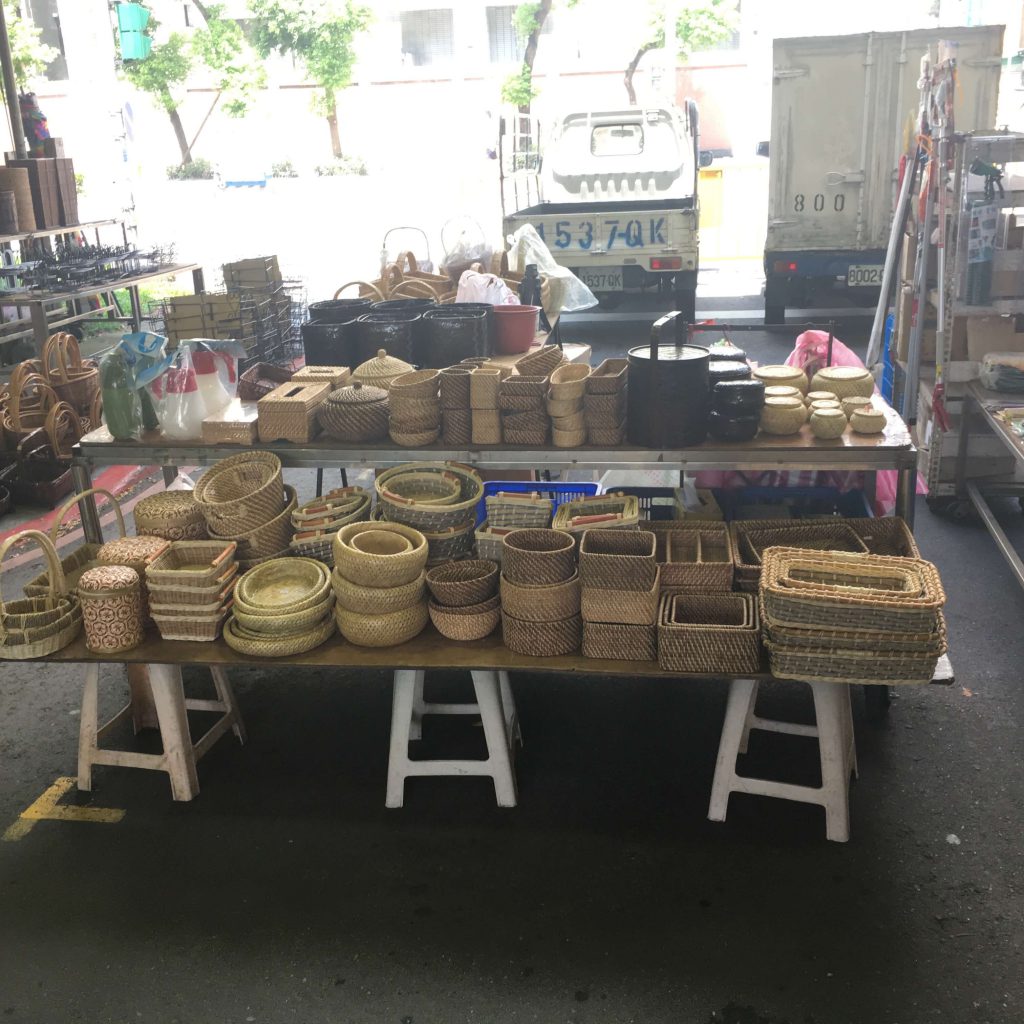 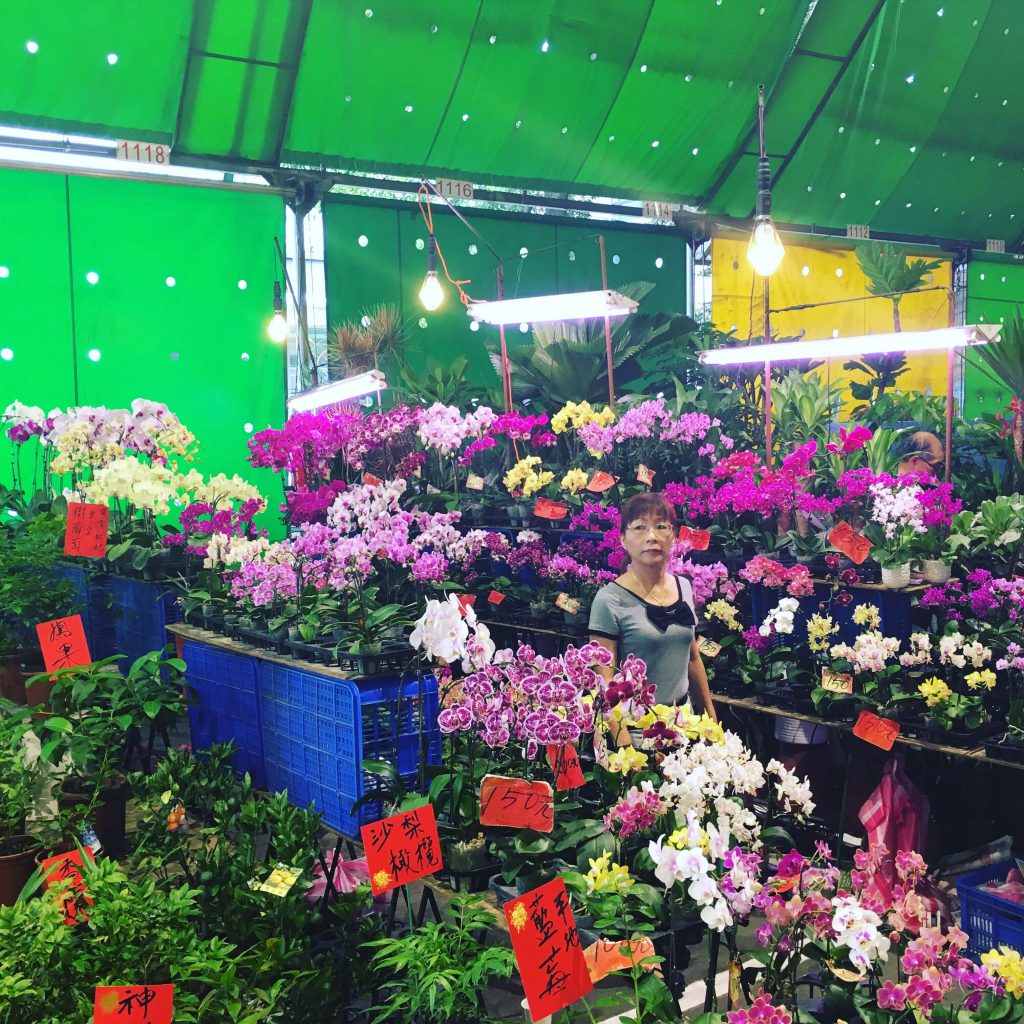 Other than that, I tried to make the rounds and just see what Taipei looks like and had to offer.  I even managed to get out for 4 hours on the day I left. I got to see an old, historical part of Taipei called Dihua Street.   Among many other wonderful sites, restaurants, temples, 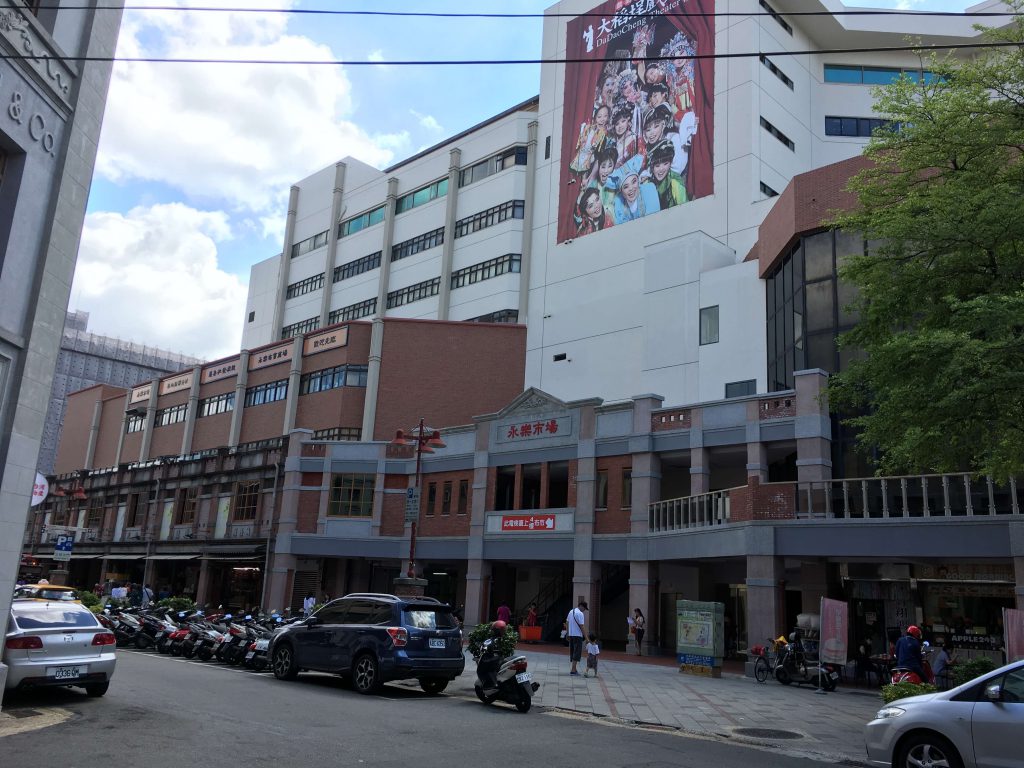 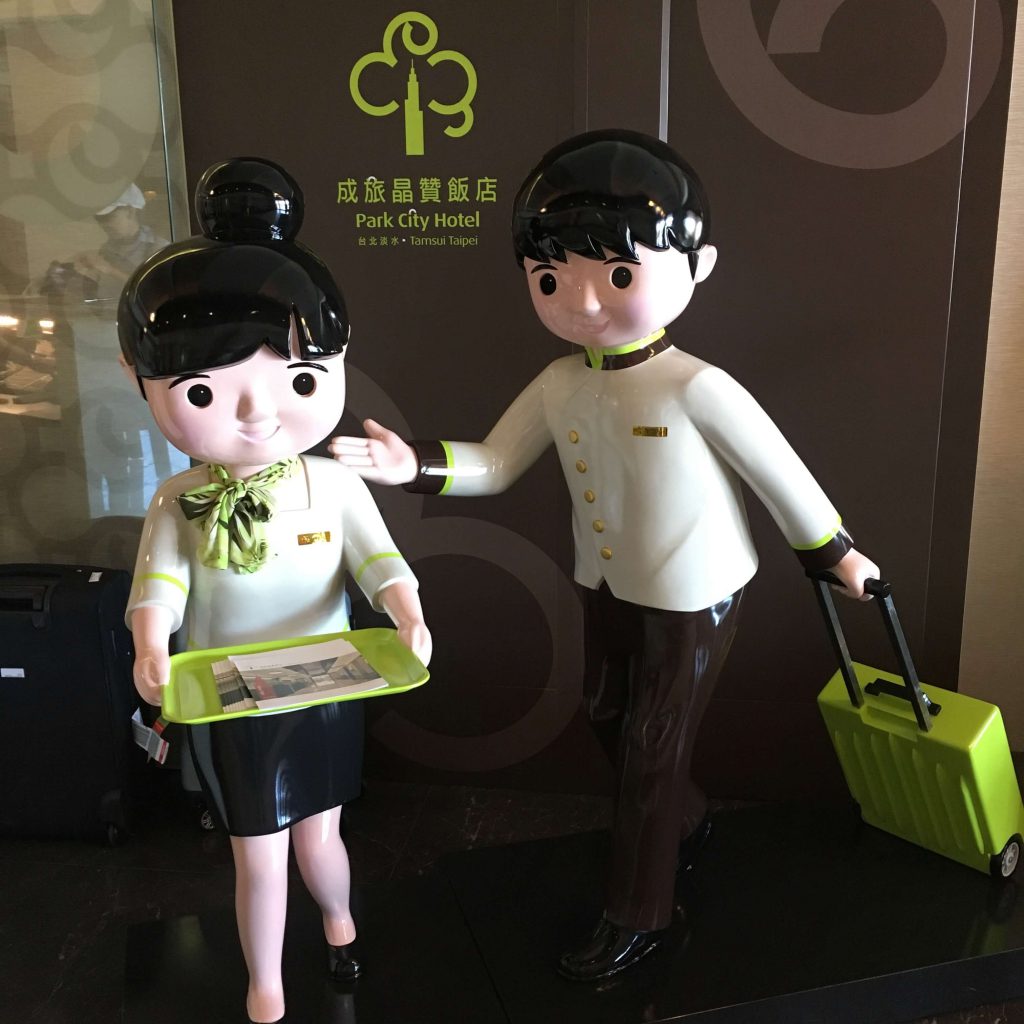 These two sweet characters were in the lobby of our hotel. 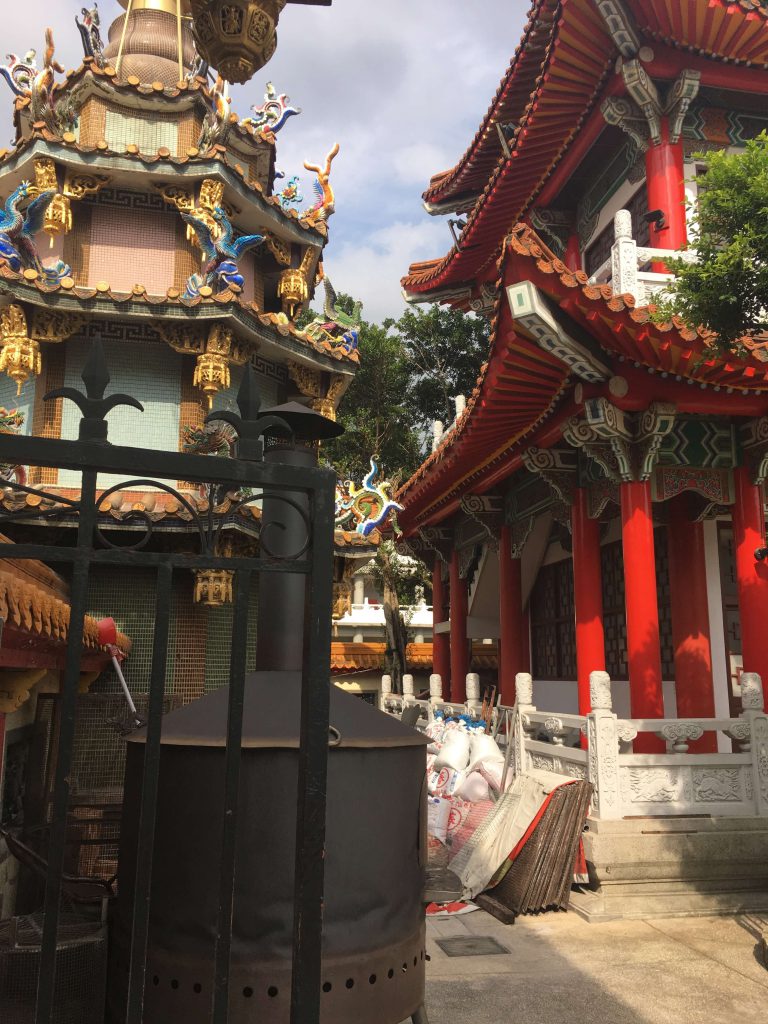 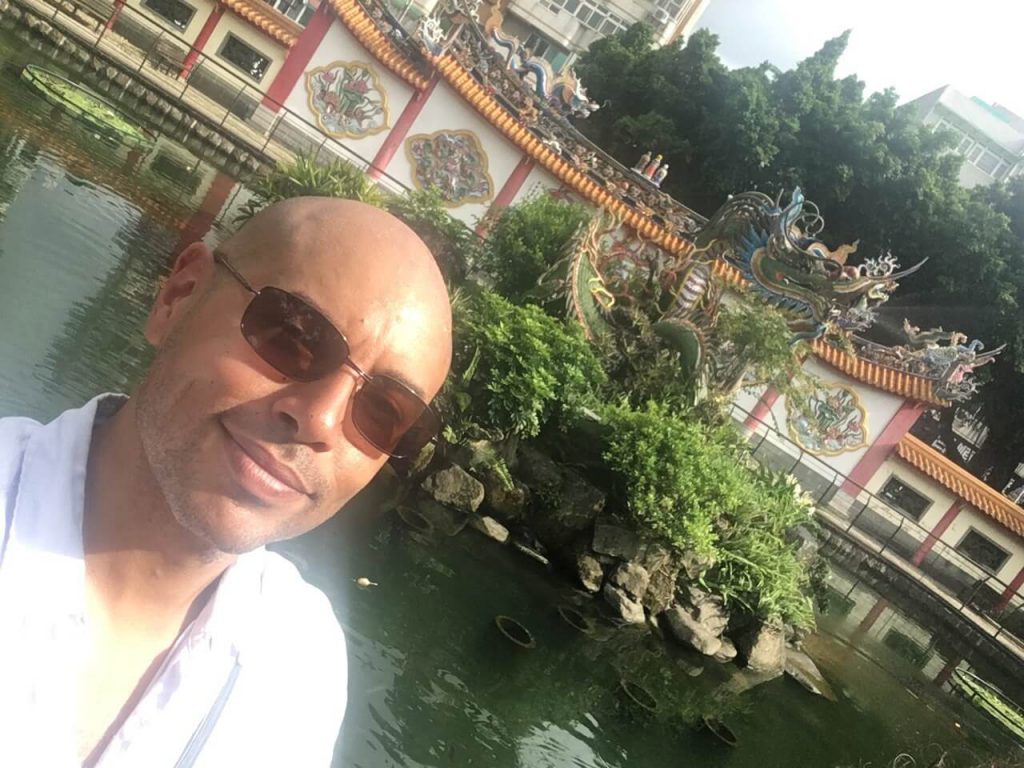 These gorgeous buildings and pond were across the street from a stunning Buddhist temple that I didn’t feel right taking pics of. 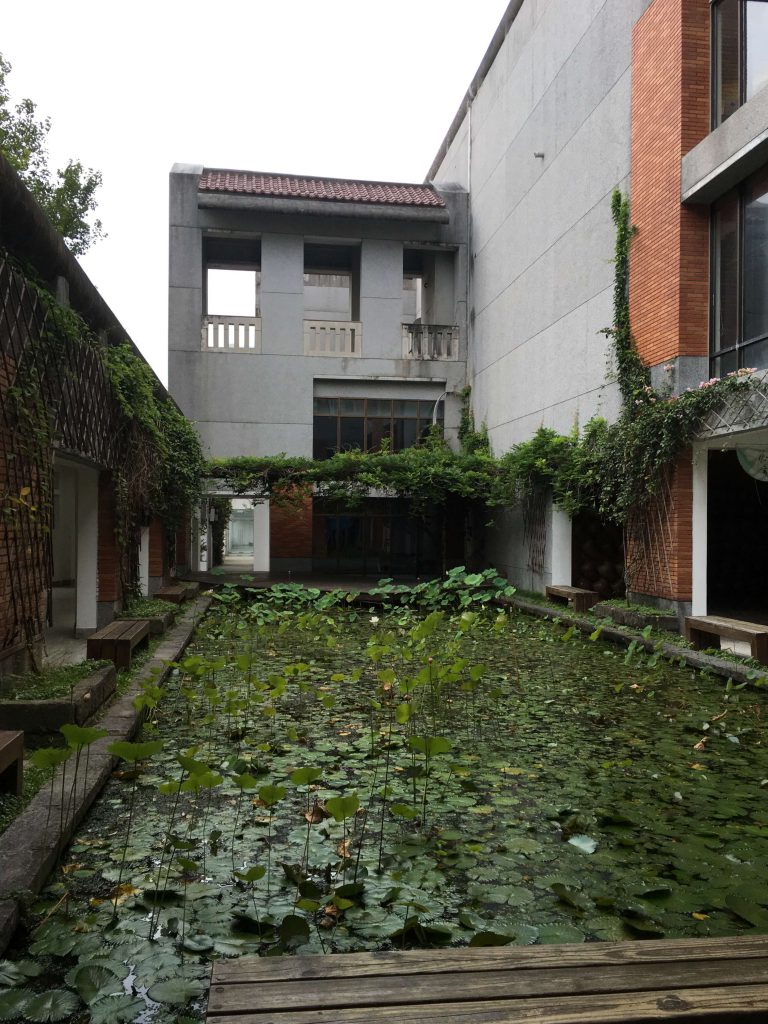 Just a smart lily pond on the grounds of the University we were performing at. And outside one of the restaurants on the grounds was this … bench.  Ummmm not sure what they were trying to do here but I never saw anyone sitting on it ….. 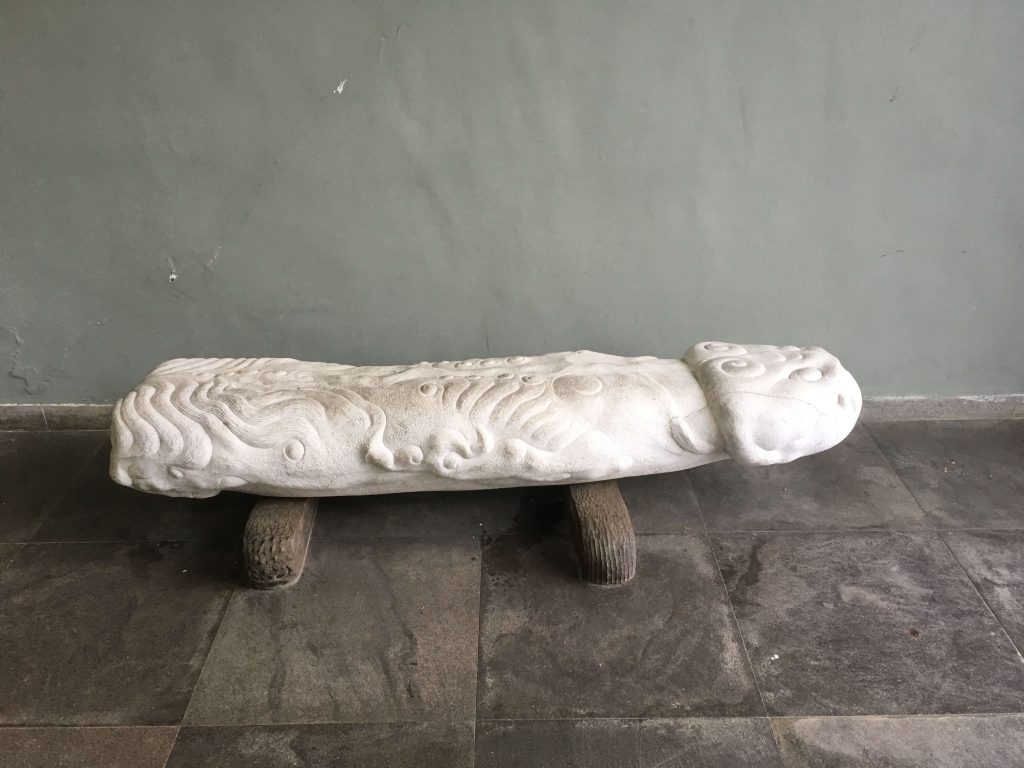 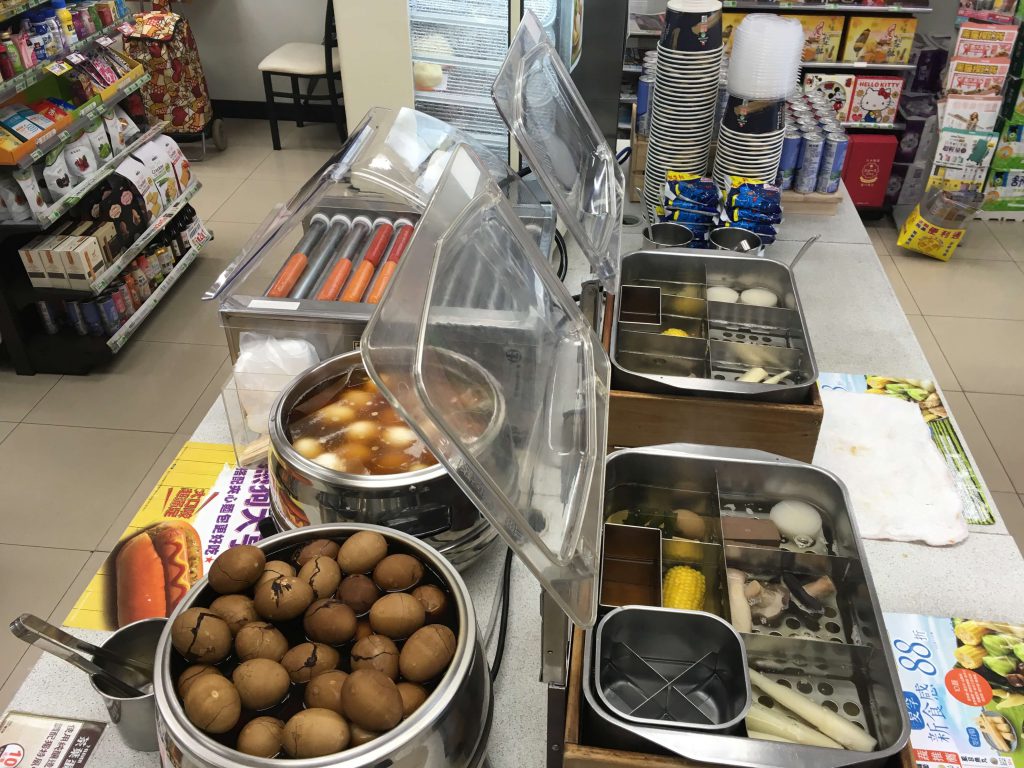 Any guesses what this little buffet is???  This is the local 7-11.  I love cultural parallel non-parallels. 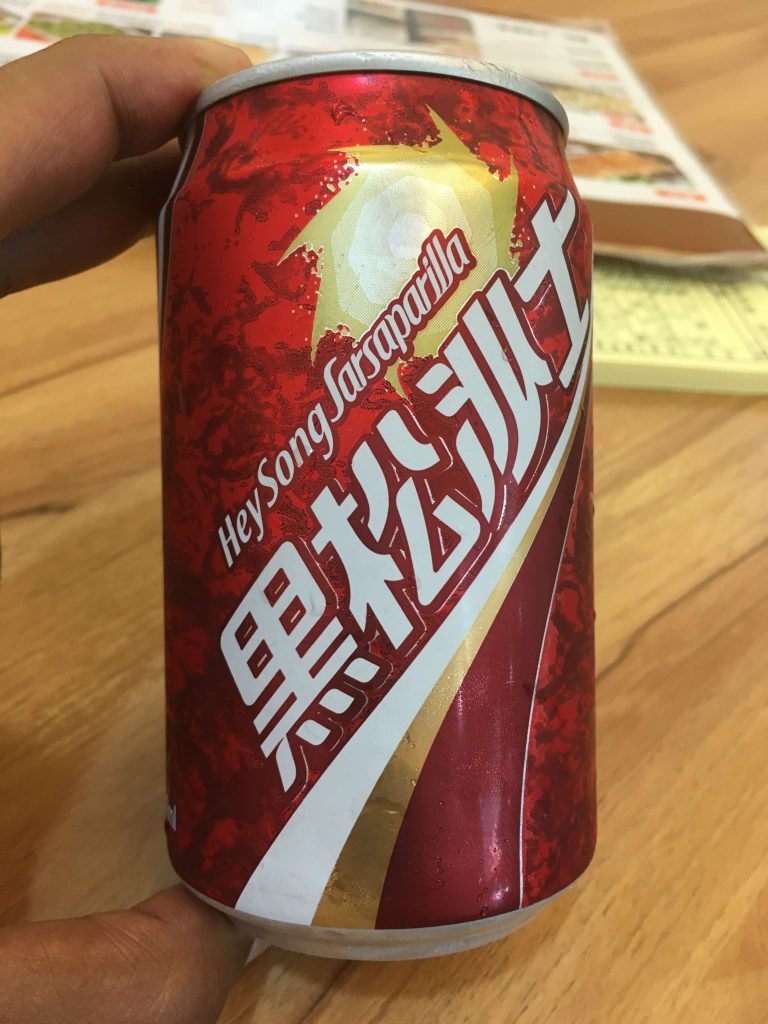 And this was my favourite looking beverage.  Nothing quenches your thirst like an ice-cold can of Hey Song Sarsaparilla. 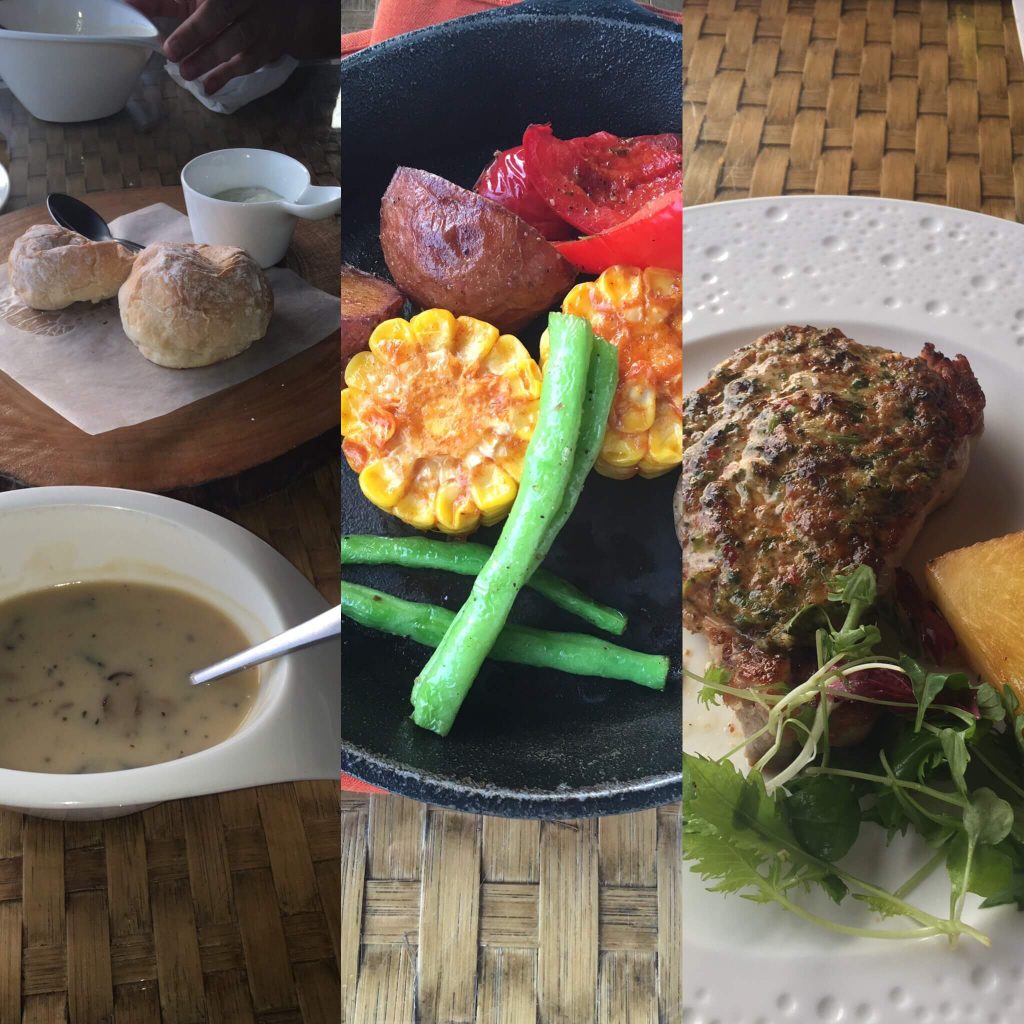 This was the gorgeous and unexpected meal I had between shows one day. I thought was just ordering a main course… and indeed I guess I was.  But I didn’t realize the rest came with it.  It was all absolutely delicious.  And I didn’t get a picture of this but I was sitting by the edge of boardwalk, overlooking over the water. 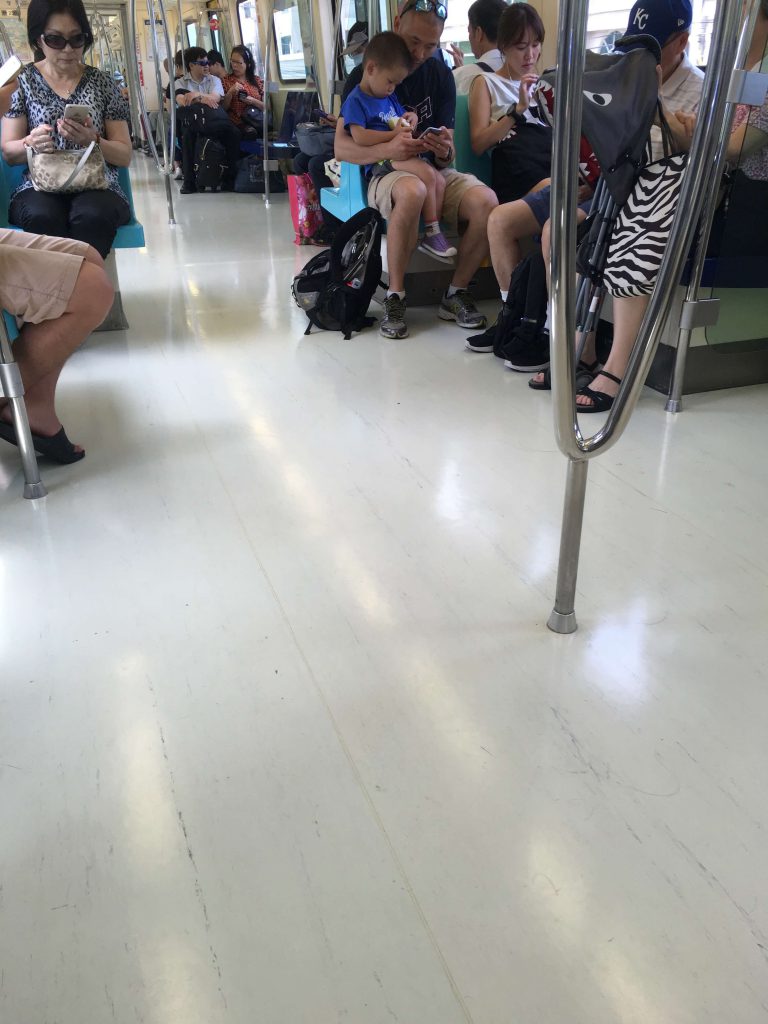 And, my God, I’ve never seen a subway floor this clean.  You could literally eat off of it. Every car I got into was spotless and so easy to use. 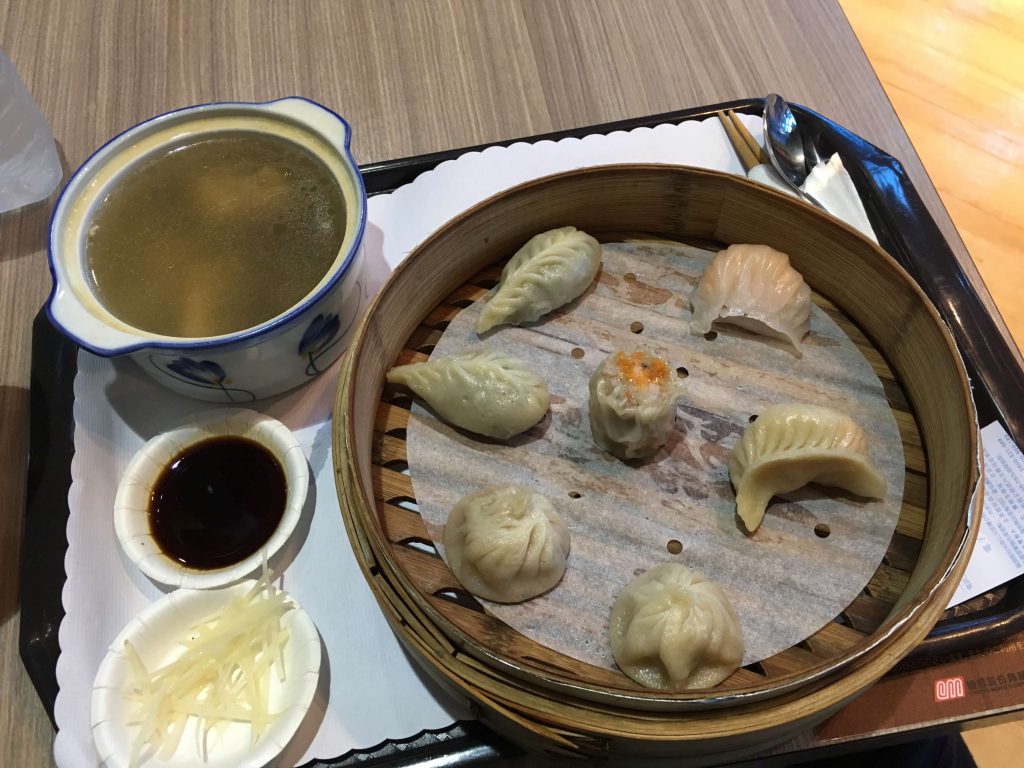 And I love that that was the meal I had in the airport. Fantastic.

And I even managed to live-tweet the season launch of KILLJOYS with my buddy, the fabulous Kelly McCormack 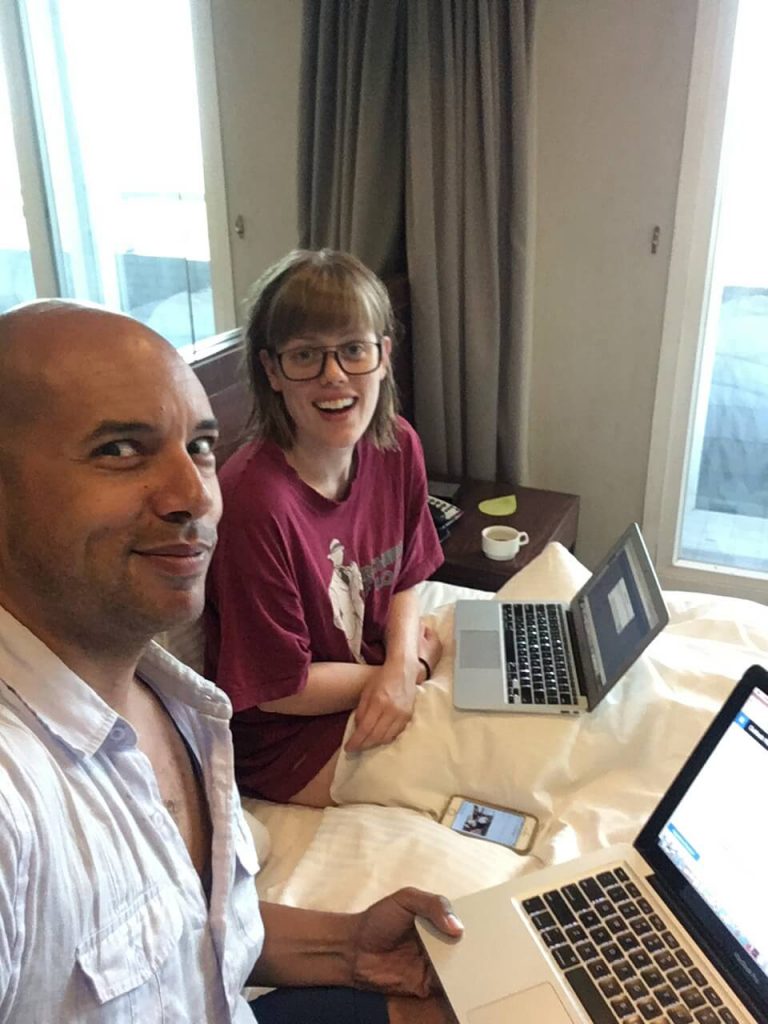 Lord, I’m writing this on the plane and suddenly felt the exhaustion kick in.  I may have to finish this after a sleep. I have a 10 hour flight from Taipei to Vancouver which, we were in informed at the start of the flight, is going to be an hour or so longer because we have to avoid a storm.  But I have to admit, I don’t feel feel mad about that.  I like travel and I can usually sleep no matter what’s happened. More when I’m more awake. 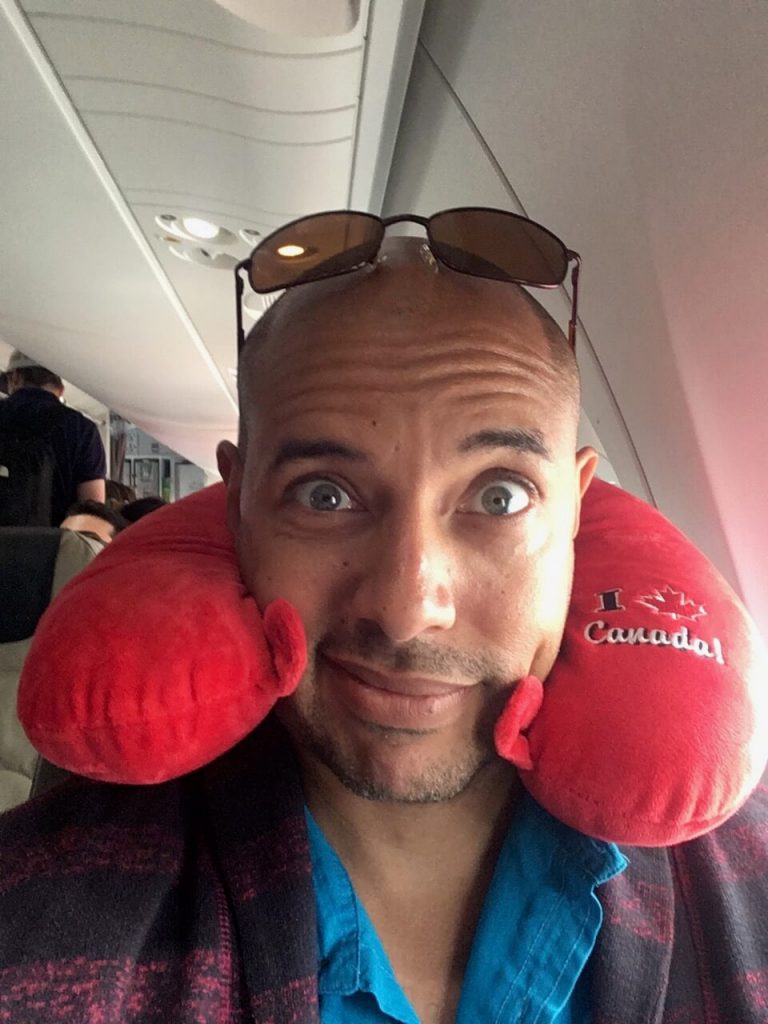 Oh and I managed to do a live Facebook post with a guided tour of the old part of the city.

One Response to “TAIPEI BLOG”