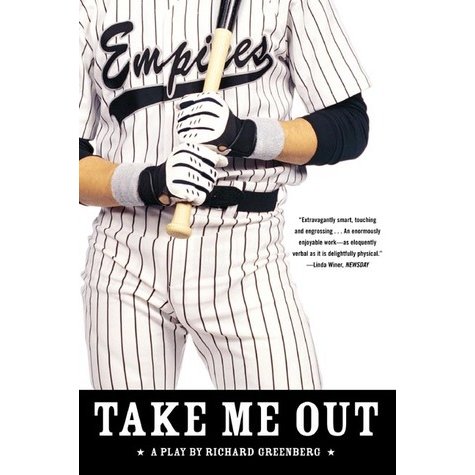 "Thom Allison escalates super-stardom as Darren. The character becomes less godlike after coming out of the closet and the actor tones down the athletic pomp with striking humility."


"As Darren, Thom Allison exudes a strong confidence, strutting across the stage in all his glory while acknowledging his 'godliness' as a superb hitter. Director Morris Panych has chosen the strapping Allison to challenge the image of the stereotypical gay man."


"Thom Allison is superb as the headstrong Darren Lemming."


Toronto Takes On Take Me Out

But Hamilton likely not ready for gritty play about locker room homophobia
story by Gary Smith The Hamilton Spectator Jan 26, 2005

When I saw Take Me Out in New York a couple of seasons ago, I knew it would come to Toronto. Not Hamilton, you understand, but Toronto.

With its gay theme, male nudity and a no-holds-barred look at the win-at-any-cost hypocrisy of sports, it’s probably too tough for Aquarius to take on.

Too bad. It’s one hell of a play. Uncompromising in its indictment of homophobia in the locker room, Richard Greenberg’s award-winning drama has wider implications for society at large.

For actors preparing to take the plunge into its tough world of rough language, bare butts and gritty issues, it’s a particularly tough challenge.

Thom Allison isn’t flummoxed by the play’s nudity. “I’ve done the onstage nude thing before. And there’s nothing gratuitous or titillating about what happens here. These nude scenes suggest the difficulty of laying your soul bare. This isn’t just about bare butts.

“The play is about more than coming out as a gay man. It’s not, in fact, about being gay at all. It’s about opening yourself up. It’s about anyone coming out from some silent place, opening up to people, to love, to the world. It’s about making connections and how difficult that can be.”

“Before this play I never even watched baseball,” he grins. “When I knew I was doing the show I went to a game. By the end I was on my feet screaming. It’s about rooting as a crowd, raising collective spirit.

“The thing about Darren is when he tells his team he’s gay he hasn’t become someone else. He’s the same guy they loved a few moments before. Now they think he’s objectifying them in the shower, eyeing them as they change. How ridiculous.

“It’s just that baseball has always been such a publicly heterosexual world. It’s not, you know. It’s no different than any place else.”

“He’s not a nice guy,” Shara laughs. “He’s so filled with rage and consumed by a need to blame. He’s a southern boy brought to the big city by the game and he’s a white supremacist bigot.”

Shara, who is straight, can’t quite understand why anyone would object to changing in a dressing room with someone openly gay.

“The play just deals with this so beautifully. Being gay is just part of the mosaic, that’s all. What’s the big deal? I played a lot of sports as a kid, though, and I know how many men think.”

Shara has never done a nude scene before. “I have to admit dropping my pants was pretty hard. Doing it in the rehearsal hall was one thing in front of people I know. Onstage in front of 800 people a night is quite another thing. Yet it feels right for the play and the scenes I am playing. It adds a different dimension. You begin to wonder about your body and how you measure up. Me? Frankly I don’t think I’m all that hot.”

Allison laughs. “It gets easier every time out. I have an OK body and I go and work out. And you know, just maybe, the emotional nakedness here is tougher to deal with than the physical nudity.

“The ideas here are more important than just dropping your towel in the shower. Make no mistake, this play isn’t asking for tolerance of gay people. That’s giving the straight world too much power. It’s just time to get over the idea being queer is something shocking, that’s all.”

As I said, folks, unless pigs fly, you won’t see this one at Theatre Aquarius.

CanStage’s Take Me Out is at Bluma Appel Theatre, 27 Front St. E. Toronto through Feb. 12. Strong language and male nudity.