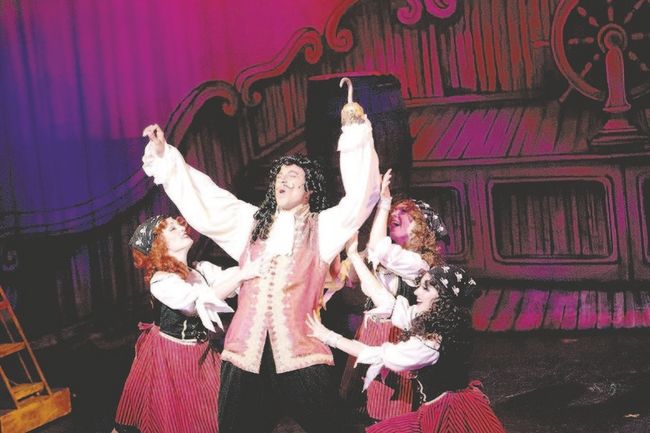 “Thom Allison is fantastic as Captain Hook. He is as playfully evil as a DreamWorks villain, with a touch of Freddie Mercury swagger. Allison appears to revel in the boos emanating from the kids and adults in the audience, although he is also one of the funniest characters in the play. He had the crowd chuckling with the simplest of lines, including when he enters one scene saying “Hey, hey, hey!” with the attitude of a triple-snapping diva."


“David Connolly, director and choreographer, has done a superb job with this cast, led by Thom Allison, who doubles as the father of the Darling children and Peter’s arch enemy, Captain Hook. Allison is a wonderful actor who seems to relish in the role, his eloquent but powerful and commanding voice that can slip easily into a whine, perfect for the role.”


“Thom Allison is terrific in the dual role of patriarch Mr. Darling and the evil Captain Hook. Allison captures the spirit of the infamous scoundrel, portraying Hook with the perfect balance of villainy and humour. Children especially take great joy in booing him, while laughing at his outlandish antics.”

Thom Allison said portraying Captain Hook has long been an item on his bucket list. He’ll get the chance starting next week in “Peter Pan: A Traditional British Panto” at the King’s Wharf Theatre.
Midland Mirror
By Travis Mealing

PENETANGUISHENE – Veteran actor Thom Allison wants to hear boos when he takes to the stage at the King’s Wharf Theatre on June 4.

No, he hasn’t taken leave of his senses after 32 years in the acting business. It’s simply that a good heckling will mean he’s nailed his role as Captain Hook in the Drayton Entertainment production of “Peter Pan: A Traditional British Panto.”

“The more the audience is vocal and yelling at me and reprimanding me, the better,” he said. “It’s so the opposite of any other kind of show.”

Allison said it’s a delight to play an “iconic” villain who ranks alongside Voldemort, Darth Vader and Hannibal Lecter in the all-time rogues’ gallery. Even better, this version of Hook shifts moment to moment, line to line, between markedly different personalities.

“It’s an actor’s dream. There will never be the words, ‘No, it’s too much’ in this rehearsal period.”

Born and raised in Winnipeg, Allison has acted in productions at the Stratford Festival and the Shaw Festival, and has also appeared on Broadway in “Priscilla: Queen of the Desert.” Toronto theatre audiences might recognize him from the companies of “Miss Saigon,” “Rent” and “Tommy.”

He said portraying Captain Hook has long been on his bucket list – “I’ve been wanting to get to him for ages” – but playing him in a pantomime only makes it sweeter.

“It’s crazy and zany and fun and irreverent,” he said, explaining the format encourages the actors to break the “fourth wall” and engage the crowd. “You get the adults laughing at the in jokes, you use contemporary references…. The show is just an excuse to be ridiculous.”