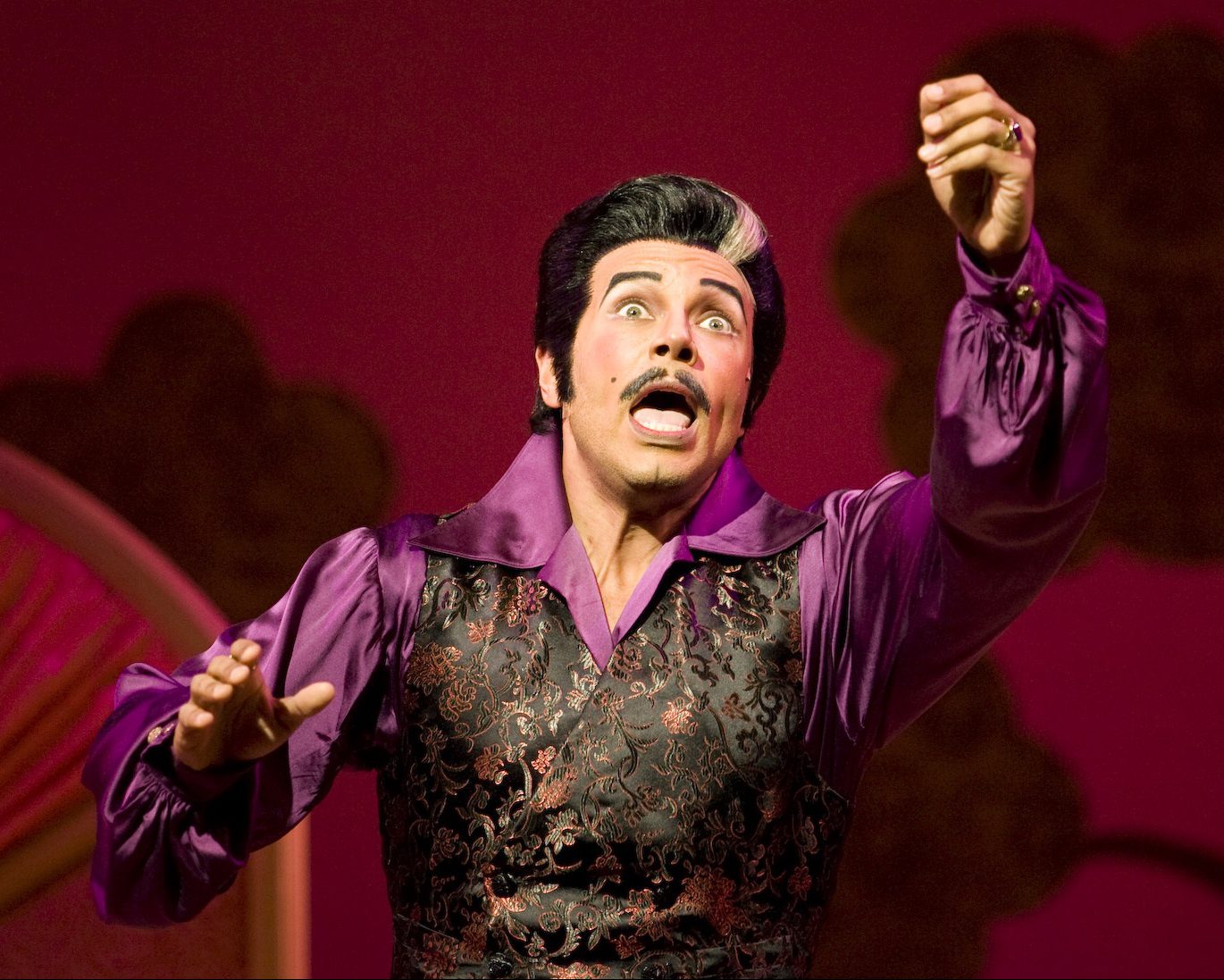 "There are over the top performances like Adolpho, performed by that irresistible Latin lover Roman Bertelli played by Thom Allison. Allison also makes a particularly hilarious appearance as a Chinese emperor who got into the show by mistake."


"Thom Allison, his hair a glistening black with a skunk-like white streak coursing through it, is a scene-stealing Aldolpho, a Latin Lothario so enamoured of himself that he sings an entire song about his own name."


"As Aldolpho, the slippery Latin lover, Thom Allison is perilously close to an over-the-top characterization and makes great use of his cape. His duet with the Chaperone, elegantly played and sung by Susan Gilmour, is hilarious."


"I, rather predictably, fell for Aldolpho (Thom Allison), the Latin lover. Supposedly a former silent movie actor, Aldolpho struts around the stage, throwing grand gestures every which way, a permanent grin across his heavily made-up face. By the end of the show, every twitch Allison makes — even his delivery of a simple line like “What?" — is enough to send waves of laughter rolling through the audience."


"Soon after Timuss’ song and dance, Thom Allison steals the show as Aldolpho, a Latin Lothario intent on seducing the bride-to-be and breaking up the wedding that the whole play is supposed to be building up to. Allison’s debut Citadel performance is uproariously over-the-top and each time he appears on stage, the sense of excitement in the audience buzzes thick in the air as everyone leans forward expectantly to see what outrageous thing Aldolpho will say or do next."


"The biggest scene-stealer of them all ( "there he is, chewing the scenery," as Man In Chair says) is Shaw Festival veteran Thom Allison, in riotous form as Adolpho, whose self-infatuation is as immense as his brain is tiny."


"Thom Allison's fat-headed, self-oriented Latin lover, Adolpho, is so continuously over-the-top funny that in any other production you could say he would run off with the show."


"Full marks also go out to Thom Allison whose rendition of a South American leading man will leave attendees simply spellbound with disbelief that he’s so funny."


"Thom Allison is at his comedic best as Aldolpho, playing the role for every possible laugh - and he gets them. It's a shame he doesn't sing more in the show, but so wonderful to see him tackle a role that seems to have been created for him."


"Thom Allison shows us how it’s done as a Latin lover named Aldolpho. Brazeau’s performance is delicate. With its outrageously broad racial stereotyping and deliberately over-the-top acting, Allison’s is bombastic. But, in their colourfulness and precision, both portraits capture the musical’s sense of camp celebration. “I Am Aldolpho”, in which the character sings the splendours of his name, is a stunner, both because of its comic force and inventiveness, and because of the surprising beauty of Allison’s tone."


"The performances of the people within the musical itself are especially funny because they contain two layers. As Man in Chair comments on the careers of the actors on his ancient recording, Aldolpho, for instance (played by real-life actor Thom Allison with an outrageous machismo), is revealed to have been played by a Latin heartthrob whose heavy drinking led to his death by poodle attack."


"I never laughed so hard as I did at The Drowsy Chaperone at the Vancouver Playhouse. The cast is insanely funny and the fact that this is a Canadian script that has made it big in the US hopefully will convince people to reward themselves with this over the top tribute to musicals of the 1920’s. Jay Brazeau will make you laugh as he breaks your heart and Thom Allison is demented as Aldolpho."


"Besides Brazeau and Timuss, whose showy number "Show Off" is a highlight, the scene-stealer here is Thom Allison, hilarious as the broadly ethnic, narcissistic lothario Aldolpho."


"The stuff that most people find funny doesn't usually get more than a smile from me but for some reason the outrageously-over-the- top Latin Lover, Aldolpho, here played by Thom Allison, gets me going... Apart from every scene with the utterly ridiculous Adolpho, my favorite bits included... Apart from aching ribs if you too fall for Adolpho, you'll feel great."

Gillian Wolpert
[Re]View From The House

VANCOUVER — Max Reimer is having a ball. As he bounces up and down on his office sofa, excitedly discussing his new production of The Drowsy Chaperone, it wouldn’t be all that surprising if he suddenly burst into song.

Brought in this year to reinvigorate and boost the revenue of Vancouver’s Playhouse Theatre, Reimer is already making his mark. The Drowsy Chaperone is proving to be box-office gold: Just days before it opened for previews, ticket sales were tracking second only to 2002’s Fiddler on the Roof – the Playhouse’s all-time bestselling show.

No wonder he looks like the proverbial cat that got the cream. This is the only production in the current season that the new artistic director picked and is directing himself – not a bad way to start. “I was hoping for success, of course, but this is surpassing my wildest dreams – this is astounding.”

The Playhouse’s version will be the first independent production of Bob Martin and Don McKellar’s runaway hit show that began as a private skit at an engagement party. It then developed into a fringe show before making it big in Toronto, and won five Tonys for the 2006 Broadway production. It received great reviews (if an aborted run) in London’s West End, before touring the United States over the past year.

The story is simple: The Man in Chair puts on a recording of his favourite musical – The Drowsy Chaperone – which comes to life in his living room.

Reimer saw the play performed for the first time just a few weeks ago, in Seattle – after the sets and costumes for the Playhouse production were already done. He says there were things that surprised him about the onstage rendition – but he was delighted to see how easily a contemporary audience accepted the style of the 1920s.

For Reimer, the key to a successful run in Vancouver is the casting. He will not, he insists, cast anyone simply because they are a “name” – they have to be able to do the job. “Singing and dancing is not subjective,” he says. “You either can hit the note, or move your feet properly, or you can’t – and I have no interest in seeing anything other than perfection.”

More controversially, he has not stuck by an unwritten Playhouse rule to employ only local actors. What is written, he notes, is a mandate to nurture and develop artists in the region, which – he argues – does not preclude employing actors from around the country.

“I still want to nurture local talent,” he says. “So I will continue to glance in that direction – but only glance. In the end, I want the very best, so I will not put restrictions on myself.”

The Drowsy Chaperone has a cast to die for, he boasts. In the title part is Gabrielle Jones, a veteran of the Shaw and Stratford festivals with a number of musicals from Follies and A Little Night Music, to The Boy Friend and Les Misérables on her résumé. Another national musical theatre regular, Thom Allison, takes to the boards as Adolpho, the dastardly lothario employed to derail the marriage of the play-within-a-play’s starlet, Janet van der Graaff, played by local actress Debbie Timuss. As Janet’s real beau, Robert Martin, is Laird Mackintosh – whose impressive credits include seven seasons at Stratford and 10 productions for Opera Atelier. (In a behind-the-scenes romance, Mackintosh’s new wife and two-time Tyron Guthrie award-winner, Dayna Tekatch, is the Vancouver production’s choreographer.)

“I have been patting myself on the back,” Reimer beams.

If there’s an air of smugness, one can hardly blame him. His appointment generated some backbiting around the city, with commentators voicing concerns that in order to drive the theatre’s subscribers up, the content would have to be dumbed down.

“Being populist is a big negative, isn’t it?” he says, throwing his arms wide across the couch with a sigh. But his decision to mount Drowsy instead of The Wizard of Oz “was the opposite of dumbing down – we went to a more intelligent play, a more challenging play in terms of sales, and something for adult sensibilities, not children. And it’s selling better than ever.”

This is clearly a touchy subject for Reimer, whose 12-year tenure at Hamilton’s Aquarius Theatre saw an increase in subscribers to 8,000 from 5,000.

“And what did I do there?” he asks, before offering the answer himself. “I did 99 Canadian plays in 12 years, 51 of them on the main stage. No artistic director of an A-category theatre can claim that, and that is my ace in the hole.”