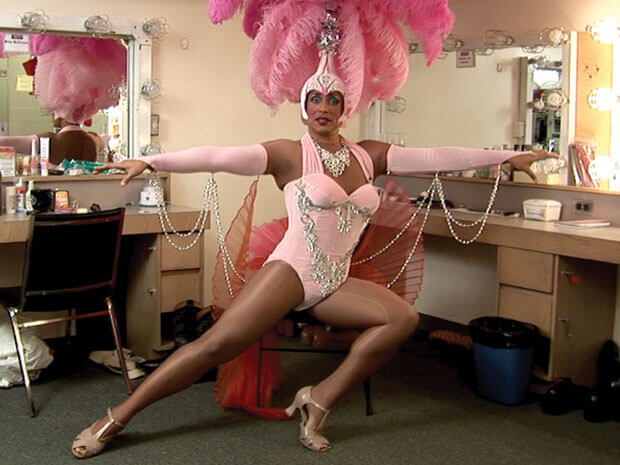 Thom Allison says being a cupcake or paintbrush can be a drag
by Jon Kaplan
October 21, 2010

Thom Allison has played a Swedish count, Cabaret’s Emcee, Daddy Warbucks and a hungry wolf, but until now he’s never been a green cupcake twirling under a clear plastic umbrella.

That’s only one of his costumes in the outrageously designed, warm-hearted and funny Priscilla Queen Of The Desert The Musical, based on the cult film that traces the adventures of a trio of friends – two drag queens and a transsexual – across Australia in a bus they dub Priscilla.

“I get to wear 11 costumes, which is crazy but great,” laughs Allison, who plays a variety of characters and also understudies Bernadette, the transsexual. “I’m everything from a rustic townie and a showgirl in cotton-candy pink with a 4-foot feather headdress to a paintbrush.

“The costumes are so delicious that I think of them as fantasy confections. It’s like you’ve walked into an amazing bakery that features not only cupcakes but also petit fours and éclairs, all colours of the rainbow and dusted with sparkles and magic.”
Download associated audio clip.

Those costumes are one of the most demanding aspects of the production.

“At this point in rehearsals, the more interesting the costume, the more difficult it is to manoeuvre. The paintbrushes are really wide and have fringe at the bottom, so we all have to be careful not to step on each other as we move around.

“And you have no idea how much effort it takes to get six or eight enormous cupcakes onstage together.”

The flip side of the difficulty is that they’re one of the production’s most fun elements. Having seen the show in London, I think that the costumes outdo anything in the original film.

“I wish I could be out in the audience watching the action,” nods Allison with his characteristic big smile. “Jaws will be dropping, for each scene tops the next. You can’t believe that they’re going to go further, and then they do.”

But the show is more than visually appealing; the fluffy exterior hides some earnest, emotional moments about the relationship between one of the drag queens and his young son and also the journey of Bernadette, a former drag queen herself.

“It’s a show about love, about chosen family,” says the actor, “and while it has a gay appeal, it’s not a show about being gay.”

Allison’s been getting tips about Bernadette from Tony Sheldon, a memorable Bernadette in three other productions of Priscilla.

“She’s an extraordinary character, for she was a man, living as a gay man, and has kept the sensibility of the gay world even though she’s now fully a woman. She balances both worlds, becoming involved with a straight guy, Bob, and wanting to be a woman to his man.

“Bernadette is pretty daunting to play, because you have to show the audience how she’s lived her life. In Tony’s hands, she’s a wonderful blend of the toughie, the broad, the lady and the girl, as well as a bit of the clown who can laugh at herself. She’s never too big or grand not to roll her eyes and realize she’s just acted like an idiot.”
Download associated audio clip.

But Allison keeps returning to the show’s fun, part of which is in its music: classic pop and disco tunes that include I Will Survive, It’s Raining Men, Say A Little Prayer and Girls Just Wanna Have Fun.

“In the film, the boys lip-synch the club numbers; here, a trio of divas descends from the sky and sings as the boys do their act. It’s a brilliant idea and, with the three kick-ass singers we have, will bring the house down.”