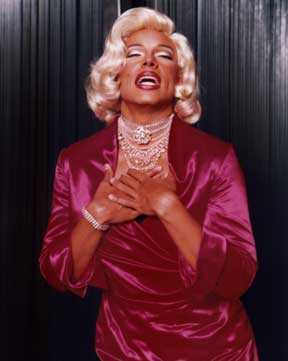 "The second act opens with Allison showing why he was cast as Robin the star. From center stage, Billie Holiday appears in her drug-induced, hilarious world. . . leaves the audience wanting to see more, and that we are given."


"...there's genuine heart displayed in the friendship between the two outsiders, and (Thom) Allison and Bailey, the best things in the show, play the dysfunctional duo with palpable warmth and chemistry."


"...it's an impressive evening on the musical front, with knockout performances from both Allison and Bailey..."


"It occasionally writhes with sexiness, thanks to super-hottie Thom Allison as a mulatto version of Robin Turner... (Thom) Allison, Murphy and Ed Sahely shine as they attempt to capture the attention of real-life drag queen impresario Rusty Ryan. There are also moments between Bailey and Allison that generate genuine warmth."


A STAR IN WAITING

He can’t sing. Not a note. But Brad Fraser is bringing a musical to town loosely based on the 1977 film that made Toronto-based female impersonator Craig Russell famous.

Outrageous: The Musical, with book and lyrics by Fraser, tells the story of the friendship between Liza (played by Loretta Bailey), the schizophrenic heroine, and Robin (Thom Allison), gay hairdresser and aspiring drag queen. Both take what others deem as undesirable or unattractive traits and turn them into strengths.

Outrageous is not a young play for Fraser; it’s been in the making for several years. “I’ve been working on the project since 1991,” says Fraser. “It was something I picked up thinking it would be a very quick follow-up to Unidentified Human Remains And The True Nature Of Love, and here I am, 10 years later, finally opening it.”

Fraser tried working with several composers before he found the right fit with Joey Miller (whose credits include That Scatterbrain Booky and The Prince And The Pauper). “It was the very wonderful music that brought me back to it,” says Fraser, who also directs the Canadian Stage production.

“My musical doesn’t give people pat, easy answers, and it doesn’t have a lot of stupid, musical theatre stuff going on. It’s a combination of drama and comedy. We’re trying to find a way to make the music more theatrical, to make the emotion more real.”

Outrageous has also undergone some unexpected changes in casting. Thom Allison originally played a supportive role in the earlier workshops. But over the summer, Fraser made a dramatic move and gave Allison the lead. “He was so talented, so clearly a star waiting to be discovered,” says Fraser of the young, former Manitoban. “It made sense that he would take the lead because we couldn’t keep him in a secondary role. He’s too good for that.”

Allison became involved with acting at the tender age of 12 — his mom thought him too energetic to be contained by their home’s walls. Still wonderfully energetic, Allison feels he can really bring something fresh to the role — and to the way audiences perceive the production.

“I’m mixed blood,” says Allison. “I look black. And Robin’s always been white — to this point. So [casting me] created a whole opportunity to step away from the shadow of Craig Russell in the movie. Audiences can now judge the production on its own merit.”

Fraser looks forward to opening after years of work. “It’s always a nightmare at the midway point, but they [the cast] are a very talented group of people and we’re all working very hard and hoping for the best.”

“My idea of heaven is being able to sit back and listen to people with talent sing my songs and sing the words I’ve written,” says Fraser. “It’s the closest I can come to singing in my own life.”