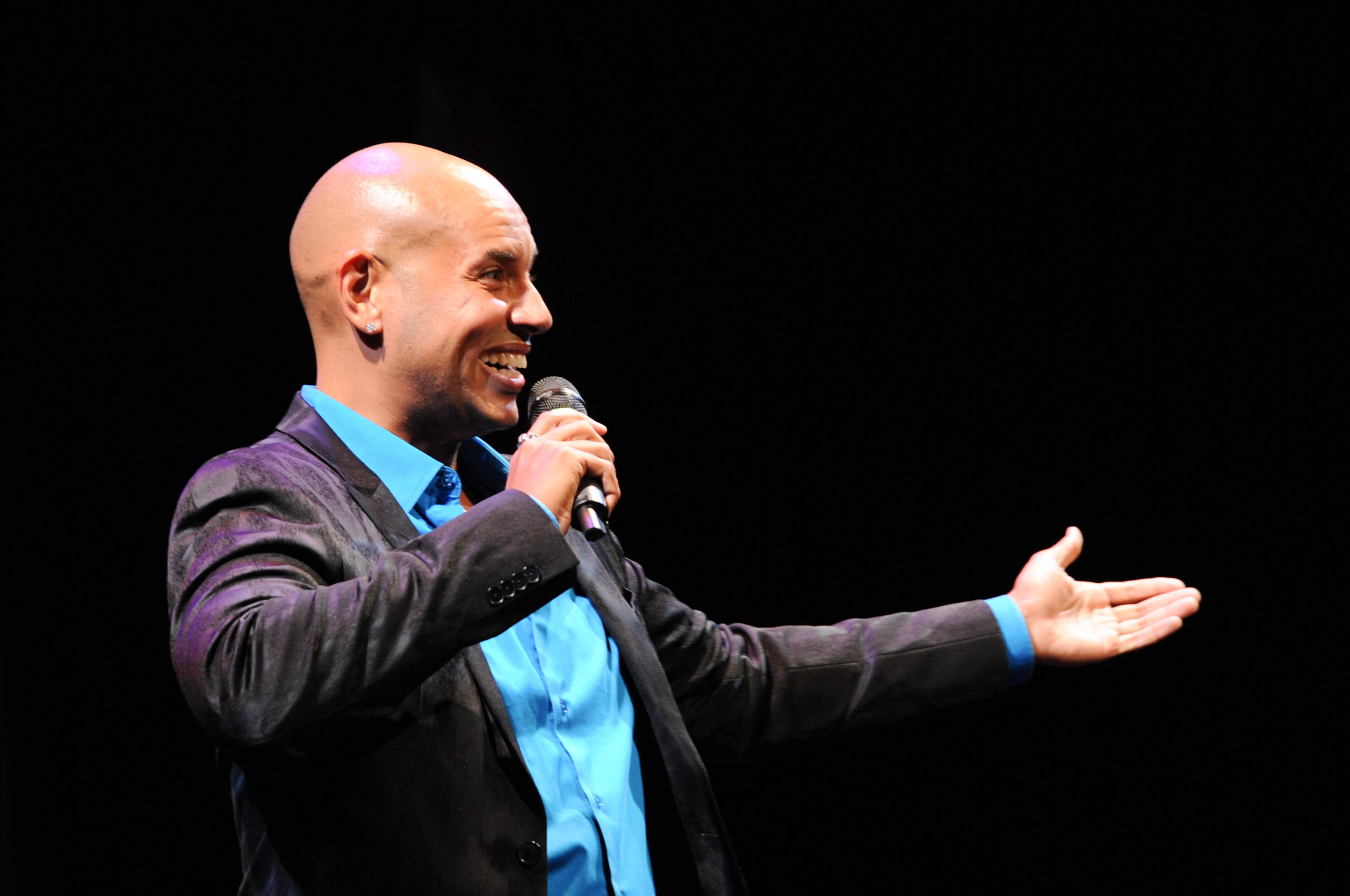 Allison Shares His Thoughts about Sondheim and Sunday’s Show

Thom Allison could have written that song from the Ziegfeld Follies.

There is no describing the love the Toronto-based singer-actor’s has for his hometown of Winnipeg. Likewise, it’s hard to describe how beyond the moon he is anticipating his intimate, one-night all-Sondheim concert “Me and My Town: Thom Allison in Concert” this weekend.

As he prepares to catch a plane tomorrow, he is thrilled returning home to perform such a joyful and challenging program for his “peeps” – the many people who supported, followed and encouraged him since his first days onstage with the Actors’ Showcase (now Manitoba Theatre for Young People) when he was 12 years old.

Love me,
Love my
Town!

Indeed, the Transcona boy himself could have written those lyrics for ”Me and My Town,” the song from Sondheim’s “Anyone Can Whistle” that gives Thom his concert’s title.

This show follows his two sensational sold-out shows here in Toronto in late 2012 – his electric November “Broadway, My Way” concert at the Metropolitan Community Church in November followed by his outrageous Christmas cabaret “Shut Up! It’s Christmas” at Buddies in Bad Times in December. On a roll, he’s just starting to get warmed up for Sunday night. “Me and My Town” plays the Royal Manitoba Theatre Centre’s (RMTC) Tom Hendry Warehouse at 8 p.m. this Sunday, January 20th. If his Toronto shows are any indication, I hope the RMTC has budgeted for costs to replace the roof.

Winnipeg is a terrific place to host a Sondheim Festival. Len Cariou, the great Sondheim interpreter, is another widely admired entertainer who calls the ‘Peg home. He starred on Broadway in the world premiere of “A Little Night Music.” Six years later, he created another role, that of the Demon Barber of Fleet Street in the now classic “Sweeney Todd,” earning him a “Best Actor” Tony Award. His commitment to his current hit CBS TV series “Blue Bloods” likely is the reason why he isn’t in Winnipeg for the festival.

The song that got away

There’s a great story Cariou tells about the song that got away. During the out-of-town tryout for “Night Music,” director Hal Prince decided a scene in the second act needed a number for Cariou’s character, Frederick Egerman. At rehearsal the next day, Sondheim sat at the piano. Before playing it, he turned to Cariou and said “Sorry, Len, it’s for Glynis (Johns, who played Desirée).” The song? “Send in the Clowns.” Now, THAT’s regret.

Allison played Count Carl-Magnus Malcolm in the Shaw Festival’s production of the show in 2008. He told CBC Winnipeg hearing “Send in the Clowns” convinced him Sondheim was brilliant. “I didn’t really know what the song was about until I was 18,” he said. “I saw a televised live performance of it on Live from Lincoln Centre. Starring Sally Ann Howes (Truly Scrumptious in the movie, “Chitty Chitty Bang Bang”) as Desirée. I realized the song, using entertainment/theatre language, was about an aging actress asking her ex-lover to leave his new, young bride and return to her.

Isn’t it rich?
Isn’t it queer?
Losing my timing this late in my career.
Send in the clowns.”

Send in the clowns equals “Let’s do the jokes.” — Sondheim

Sondheim often explained he used theatrical imagery in the song, “because she’s an actress, but it’s not supposed to be a circus … It’s a theater reference meaning if the show isn’t going well, let’s send in the clowns’. In other words, `let’s do the jokes.’

“I always want to know, when I’m writing a song, what the end is going to be, so `Send in the Clowns’ didn’t settle in until I got the notion, `Don’t bother, they’re here,’ which means we are the fools.”

Allison says he “realized how this man could use melody, situation, emotion, character, and period to tell a story in song. I was hooked… My favorite show is still “A Little Night Music.”

Other Sondheim shows and roles in Allison’s career include playing a Protean in Rainbow Stage Winnipeg’s “A Funny Thing Happened on the Way to the Forum” in the Nineties (his first Sondheim,) Prairie Theatre Exchange Winnipeg’s “Side By Side By Sondheim” in 2001, Cinderella’s Prince/Wolf in the Stratford Festival’s “Into the Woods” in 2005 and Roscoe in “Follies in Concert” at the Shaw Festival in 2008.

Some of the songs Allison intends to sing Sunday night include “Giants in the Sky” and “Agony” from “Into the Woods,” “Something’s Coming” from “West Side Story,” “Putting It Together” from “Sunday in the Park with George,” “Broadway Baby” from “Follies” and “It Would Have Been Wonderful” from “A Little Night Music.”

Allison is a Bobby in waiting

He said he may sing the climactic “Being Alive,” Bobby’s finale from “Company,” as an encore that he performed here in his November concert to thunderous applause. That may prove interesting. Adam Brazier, artistic director of Theatre 20 and the director of the delayed production of “Company,” is in town with the remount of his Birdland Theatre/Talk Is Free production of “Assassins.” That show received the 2010 Dora Award for Outstanding musical and a nomination for Brazier for Outstanding Direction.

He may get a chance to see Allison strut his stuff. In my opinion, Thom Allison, the star of the Shaw Festival’s sold-out record-breaking production of “Ragtime,” who the Toronto Star called “the great new leading man of Canadian musical theatre,” would be a sensational Bobby. He has the talent and potential of easily surpassing Raúl Esparza’s memorable performance in Broadway’s 2006 revival. Casting Thom Allison as the lead would easily make the show a must-see.

Allison calls Sondheim a “musical Shakespeare,” he told Kevin Prokosh of The Winnipeg Free Press the other day. “The depth of emotion he can display in two lines of lyrics,” he said, “couldn’t be explained in 80 pages of a novel. He’s the best.”

He explained he is attracted to Sondheim’s work because “he gives a performer and audience something to strive for, to understand, to be changed by.

No one plays better with words than Sondheim – Thom Allison

“His melodies are either extremely challenging or deceptively simple, but (they are) always perfectly attuned to the emotional life of the character and the moment.

“And no one plays with words better than Sondheim, he continued. “`It’s your father’s fault that the curse got placed and the place got cursed in the first place.’ Or `We’ve no time to sit and dither, while her withers whither with her.’ Come on, that’s great stuff.”

Allison experienced his ultimate thrill as an emerging artist in 2001 when he was asked to perform solo in a gala evening titled “World Leaders Salute” honoring the beloved composer. The event, he explained, was actually a series of evenings celebrating 14 people who were all at the top of their field in different professions. Those honored included Japanese fashion designer Issey Miyake, legendary music producer, composer and musician Quincy Jones, comedienne Lily Tomlin among others. “Well, one of those people was Stephen Sondheim,” he said.

“Other performers that evening included such talents as Canadian musical theatre icon Susan Gilmour (Fantine in Les Miz) and Tony Award-winner Brent Carver, who won the Tony Award for his performance in “Kiss of the Spider Woman” on Broadway after performing it in London’s West End.

“I will never forget that night,” enthused Allison. “I was going to sing `Finishing the Hat’ from `Sunday in the Park with George,’ and there was Stephen Sondheim sitting about 20 feet from me in the front row!”

“We were all so nervous backstage. Barely anyone spoke. But the moment they opened the curtain for me to walk out to sing, I got really calm. I strode out to the spot I was to stand and I saw HIM sitting there waiting to hear me. I nodded to the musical director and then managed to sing the song – I didn’t forget any lyrics.

“My knees buckled and I fell to the floor, shivering” – Thom Allison

“At the end, I saw him applauding with the other audience members. Then, I calmly made my exit and the moment I was offstage, my knees buckled and I fell to the floor, shivering. The bizarre part was . . . the exact same thing happened to every single other performer that evening. He is like a deity or something.”

Despite the crowds, Thom managed to have a moment alone with him at the after party. “He was very kind and generous,” Allison said, “and had very nice things to say. But most importantly, I was able to thank him for raising the bar so high and giving us all something to reach for. It still stands as one of the greatest moments in my life.”

Toronto-based musical director Scott Christian will accompany Allison. This April, he will be the musical director for Sheridan College’s production of Sondheim’s “Merrily We Roll Along and then for Theatre 20’s “Company,” if it ever happens. Place your bets, ladies and gentlemen.

Allison created “Me and My Town” as a fundraiser for Winnipeg’s zone41 theatre as part of the Royal Manitoba Theatre Centre’s Sondheim Fest now on. Artistic Director Krista Jackson said the company brings national calibre theatre artists living or having roots in Winnipeg together to collaborate and revise classic works.

Last season, it presented its inaugural production, Bruce McManus’ adaptation of Chekhov’s “Three Sisters” and was very successful in bringing in the sold-out, acclaimed ShawFest production of “Village Wooing.”

This year. it will present the world premiere performance of award-winning playwright Carolyn Gray hilarious new play inspired by Molière’s “The Miser” and set in modern day Winnipeg.

If you can’t make it to Winnipeg, visit Song & Script and pick up copies of Thom Allison’s terrific CD “A Whole Lotta Sunlight.”

Thom Allison said portraying Captain Hook has long been an item on his bucket list. He’ll get the chance starting next week in “Peter Pan: A Traditional British Panto” at the King’s Wharf Theatre.
Midland Mirror
By Travis Mealing

PENETANGUISHENE – Veteran actor Thom Allison wants to hear boos when he takes to the stage at the King’s Wharf Theatre on June 4.

No, he hasn’t taken leave of his senses after 32 years in the acting business. It’s simply that a good heckling will mean he’s nailed his role as Captain Hook in the Drayton Entertainment production of “Peter Pan: A Traditional British Panto.”

“The more the audience is vocal and yelling at me and reprimanding me, the better,” he said. “It’s so the opposite of any other kind of show.”

Allison said it’s a delight to play an “iconic” villain who ranks alongside Voldemort, Darth Vader and Hannibal Lecter in the all-time rogues’ gallery. Even better, this version of Hook shifts moment to moment, line to line, between markedly different personalities.

“It’s an actor’s dream. There will never be the words, ‘No, it’s too much’ in this rehearsal period.”

Born and raised in Winnipeg, Allison has acted in productions at the Stratford Festival and the Shaw Festival, and has also appeared on Broadway in “Priscilla: Queen of the Desert.” Toronto theatre audiences might recognize him from the companies of “Miss Saigon,” “Rent” and “Tommy.”

He said portraying Captain Hook has long been on his bucket list – “I’ve been wanting to get to him for ages” – but playing him in a pantomime only makes it sweeter.

“It’s crazy and zany and fun and irreverent,” he said, explaining the format encourages the actors to break the “fourth wall” and engage the crowd. “You get the adults laughing at the in jokes, you use contemporary references…. The show is just an excuse to be ridiculous.”