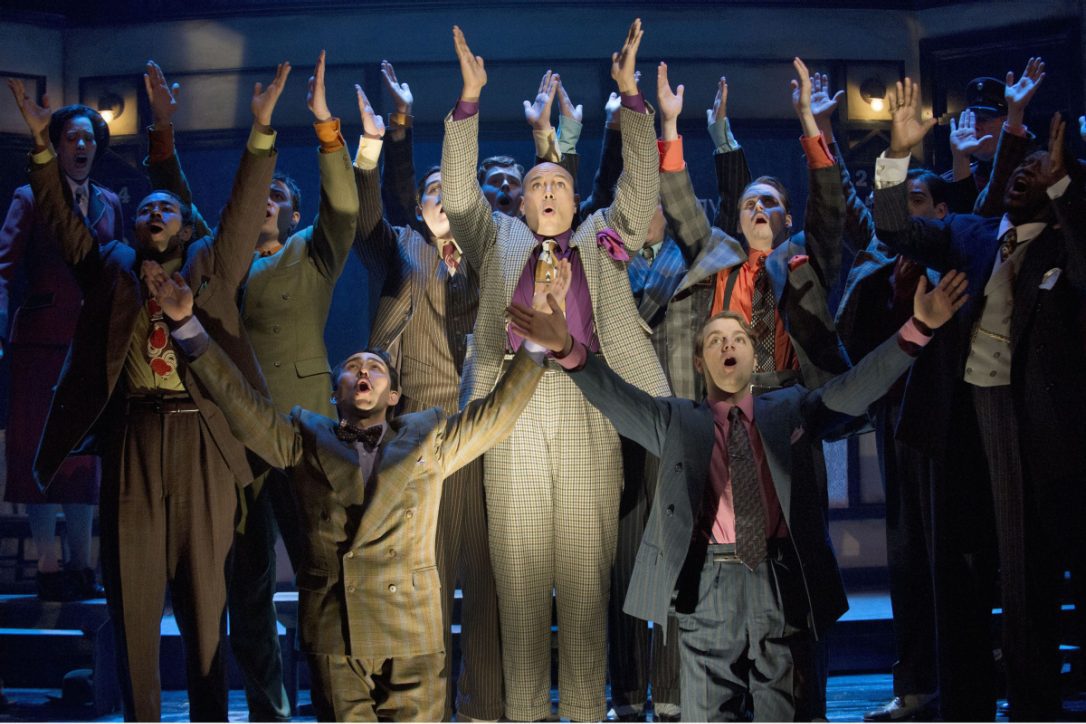 “One of the great things about theatre is just when you think you’ve seen a definitive production or performance, along comes another one of such blazing originality that it knocks your fedora off. A case in point: Thom Allison’s performance as Nicely-Nicely Johnson in this year’s Shaw Festival production of the classical musical Guys and Dolls. I’ve seen some outstanding work in this peach of a role over the years and wouldn’t have thought of Allison as a natural fit. His version of “Sit Down, You’re Rockin’ the Boat” proves me absolutely wrong. He starts out shyly — this is clearly someone not used to performing in public — piles inspiration on top of inventiveness, and ends up bringing the house down.”


“And then there’s Thom Allison. If you’re wondering what the lead in last season’s magnificent Ragtime is doing in a supporting role as hustler Nicely-Nicely, you get your answer with a jaw-droppingly great performance of Sit Down, You’re Rockin’ the Boat in which he doesn’t just own the stage, but the few square kilometres around him. It was nearly a mid-show standing ovation – Allison continues to get a rock star reception at Shaw.”


“As Nicely-Nicely Johnson, Thom Allison delivers a joyous reading of Sit Down, You’re Rockin’ the Boat that is only missing one thing: an encore.”


“It’s luxury casting to have Thom Allison as Nicely-Nicely Johnson. Not only does he have a great talent for comedy but he is a fine singer. He captures the ebullient mood of the whole show in his performance of the title tune, and his rendition of the famous song “Sit Down, Your Rockin’ the Boat” is more nuanced than any I’ve ever heard. Allison shows us how Nicely is making up his confession of a guilty dream as he goes along only to get caught up in it by the end. It’s a treat to see a standard showstopper given such a fresh, insightful performance.”


“…the crisp staging strings us along until Thom Allison provides the grand slam with his big number. Those three minutes give us a feel for the excitement Guys and Dolls must have generated when it first premiered on Broadway.”


“and his buddy Nicely-Nicely Johnson (Thom Allison), whose rendition of Sit Down, You’re Rockin’ the Boat almost has the audience standing up in admiration—the opening night theatre-goers validated the high expectations from previews with a standing ovation, with the accolades for that particular song a tribute to Allison.”


“Probably the single most life-enhancing moment of this production has that same improvisatory spirit. Thom Allison, as perpetually hungry Nicely Nicely Johnson, is called on to give testimony about his life as a sinner. He invents an allegorical dream about a journey to heaven that becomes the second-act showstopper “Sit Down, You’re Rockin’ the Boat.” In the recording from Jerry Zaks’ sublime 1992 production, Walter Bobbie sounds like this extravagant conceit sprung from his head fully-formed. It is Allison’s genius—the production’s genius—to make a tune that’s part of the American Songbook seem like a spontaneous act of invention that might, or so Allison’s saucer-sized eyes convey, collapse at any moment. The drama of Allison’s performance is the movement from creative anxiety to hope to bliss, all contained within a four-minute molecule.”