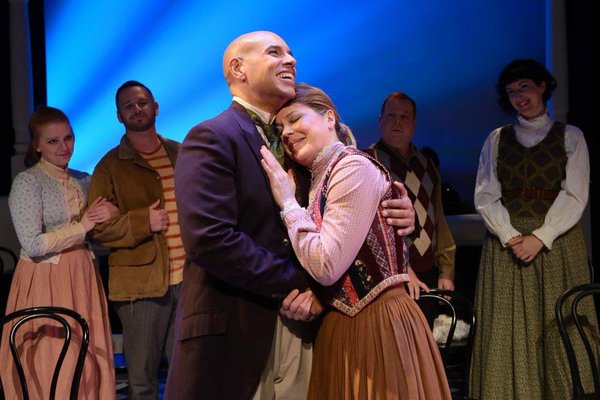 “The cast is a dream. Priam (Thom Allison) and Alice (Jennifer Lyon) are a perfect couple. Allison is courtly, compassionate, and prickly enough to handle the snobs of the world he wants to escape.”


“Stage veteran Thom Allison shines in the role of Priam. In his TIFT debut, Allison steals the spotlight each time he’s on stage, demanding the audience’s attention.”


Thom Allison stars in TIFT’s latest show ‘Darling of the Day,’ which opens next week

Sometimes banishment is the making of a man.

That’s what happened when Priam Farll was exiled to the South Pacific only to return home in a different time, to a different ruler, to find he had become somewhat of a ‘flash-in-the-pan’ celebrity. His solution was quite unusual, even for a brilliant, unconventional artist.

“The idea was crazy – switch with his dead butler,” said Thom Allison, who stars in Talk is Free Theatre’s latest show Darling of the Day – it opens next week.

“It’s a beautiful interesting show and the story is really fun.”

It is Allison’s first play at TIFT, despite years in theatre, performing in shows from Stratford and Shaw Festivals to Broadway. It was more a problem meshing schedules until TIFT director Richard Ouzounian contacted him and suggested he “take a look and listen before saying no.”

“I liked it – something said yes in my guy,” said Allison, who knew of the show but not very much about it beyond the basics — it starred Vincent Price and Patricia Routledge in the 1968 Broadway production.

Beyond the story, it was the music that really captured Allison. The songs were written by Jule Styne, a famous composer known for Gypsy and Funny Girl. The lyrics were written by E.Y. Harburg, who was behind hits such as Somewhere Over the Rainbow, Brother Can You Spare a Dime?, April in Paris and It’s Only a Paper Moon. Some of the songs in Darling of the Day should have become hits too – but the production had numerous problems and closed after only 31 performances.

“The music was great – really, really charming,” said Allison, citing Stranger in Your Eyes as his favourite song. “It’s a beautiful tune about this new person he sees that looks back at him and how he likes who this person is (now) more than the old one.”

Allison has made a career out of musical theatre, despite the fact that he never intended to become a singer. He was more interested, in the early days, in becoming a classical actor of works by Chekhov and Shakespeare. A singing teacher at Ryerson sent him in a different direction.

“They had an amazing singing teacher there who taught me to understand singing through a text – you know – open the voice and then tell stories,” he said. “Then I went to Stratford’s Young Company and did a year of it and got Miss Saigon and then for 10 years I didn’t do a straight play – I did only musicals.”

Still, he wasn’t at all sure about his voice, if it was good enough. In fact he felt like a fraud for the first eight years until one day, the worst happened – his voice cracked while he was singing at a corporate gig. He was mortified but when he looked up and realized no one appeared to care, it was a freeing moment.

“I realized in that moment I had a right to make sound, good or bad, and every now and then it cracked but it doesn’t mean that you’re not good at what you’re doing,” he recalled. “I kind of let it go and my career changed.”

Allison was born in Winnipeg and grew up there wanting to be an actor form the time he was four years old. Six years later, age 10, he was still saying it so his mother offered him an acting program for children and Allison fell in love.

All sorts of parts followed, mostly community theatre – he didn’t audition for any school plays because he didn’t think he was good enough. Yet he marked his first paid (honorarium) role at the age of 16 in Sweet Charity. He said he was in awe of working with professional actors and Alan Lund, a famous Canadian choreographer.

He also took – and still does – singing lessons here and there, to keep his voice on track. In 2003, he recorded a CD of songs, to have a memory of that place and time. One of the songs he recorded was an original, written for him for a musical he was in. Put a Lid on It incorporated his own experiences into the song.

Allison will be appearing with a cast of 10, including his co-star Jennifer Lyon, who is also from Winnipeg — he met her 25 years ago in Sweet Charity, his first paid show.