Interesting times, my people.  I’m here in Penetanguishene in the middle of our run of Peter Pan.  It’s been a great and incredibly exhausting experience.  A great cast and great director/choreographer, David Connolly. Who, incidentally, will be choreographing the upcoming Broadway premiere of First Wives Club in 2015.  He’s great.  We only had two weeks but what he did in those two weeks was astonishing.  A cast of 14 (including the boys playing Michael and John Darling) plus two groups of 18 kids that play a multitudes of roles and alternate shows.  Lots to gather but he did an amazing job.  Fantastic Stage Management team and super musical director, Michael Barber, as well as a sweet, fun stage crew.  It’s been a hoot.  But my God, I didn’t think I’d be expending this much energy as Captain Hook.  The sweat is streaming down my face and I’m drenched after the first scene as Hook.

The good news is the audience is loving it and we’re a hit.

Here is a taste of the good Captain. 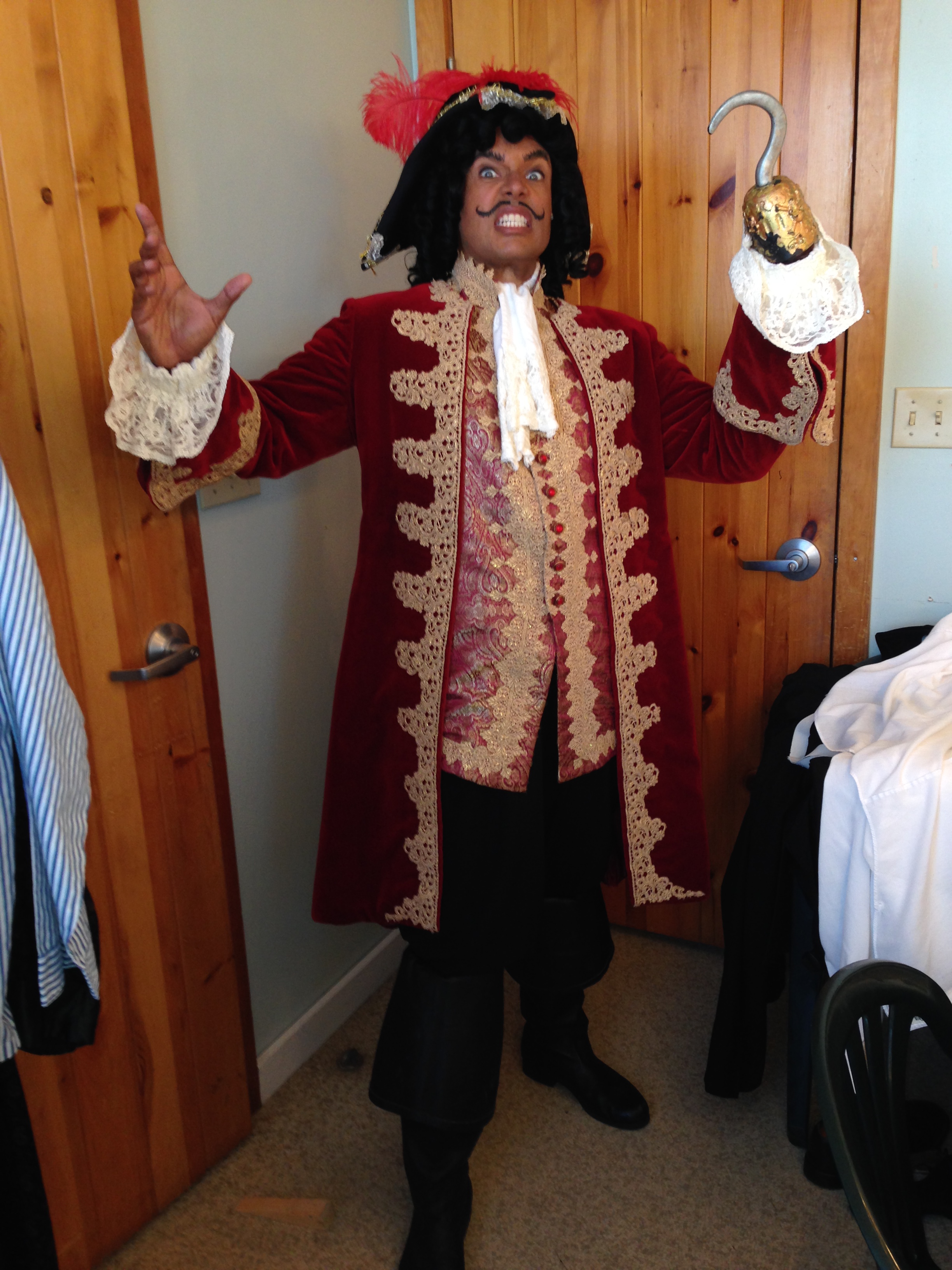 What else.  Well, in other news, I guess I can announce it now.  This Christmas I’ll be playing Donkey in SHREK at the Grand Theatre in London, ON.  Very excited about that.  I won’t say who is playing Shrek as that’s his news to tell.  But it’s a good friend and I’m so excited.  It’s a part I’ve been wanting to do for a while now.  Performance start on Nov. 19 and it runs until Dec. 28   Get your tickets now cause it will probably sell out.  Woohoo.  It’ll be directed by the Grand Theatre’s Artistic Director Susan Ferley, choreographed by Kerry Gage and musically directed by Ryan DeSouza.  All of whom I love and can’t wait to work with.  Though I’ve known her for years and love her, I’ve never worked with Susan before but heard wonderful things.  And I’ve worked with and known Kerry and Ryan for years and love them both as people and professionals so I’m very much looking forward to the whole experience.  Plus, The Grand is one of my favourite theatres to work.  Everyone is so nice and great at their jobs. It’s always a great time.

I’ve been sort of talking about opening up different possibilities for my future. I think I’ve already said it’s time for a change.  I think I’m heading for a semi-retirement from performing in theatre.  I think it will be projects I really want to do but otherwise it’s time to try other things.  I’ve always known I would direct at some point.  I directed shows at Ryerson when I was going there for theatre school but then my career on stage took off.  But I feel that getting closer.  There is certainly cabaret and concert work – I love telling stories in song.  And coaching which I think is going to start in July.  I think I’ll try some writing too but I feel like there is something else out there for me too that I don’t know about yet.  I’m excited about it though. I will always love theatre but I’ve been doing this for 32 years and I want a taste of something else.  And I don’t really have lots of roles on my list anymore.  I’ll tell you what they are . . . in case anyone is reading this who runs or has pull with theatre.  LOL . . . . but I’m serious . . . anyone?!

Witch in INTO THE WOODS

Mame in MAME (yes, Mame.  This is the ones I want to play most right now – not campy but seriously)

George in SUNDAY IN THE PARK WITH GEORGE

Ursula in THE LITTLE MERMAID

And you’ll notice there is a real mix of male and female-ish.  That’s sort of been my career and I like the theatrical gender play.  And I’m good at it.  Anyway, as far as the list goes, that is almost it.  Maybe the odd one I’m not remembering right now but that is about it.  I don’t feel the burn to play lots of roles anymore.   That’s how I know it’s time to explore other options.  Now that’s not to say that there are roles I’ve never imagined myself playing that I’m always happy to consider if someone I trust thinks I can do it and my gut tells me it’s a good idea.

Oh there’s another idea that has become clearer to me as I get older.  It’s really become clear to me that whenever I’ve not listened to my gut, I’ve not had a good time.  I’m learning that if it feels right in my gut, it’s right.  I’m going to start listening to it ALL THE TIME or at the very least, I will strive to.

What else?  Well, I’ve been fascinated by the “experience” of Facebook. I’ve been loving finding things that I share.  And what’s been interesting is seeing who responds to what.   Some things barely get a reaction and other things get a huge reaction.  It’s really kind of cool.  Seeing what people find inspirational or humourous or humourously horrifying.  What I love the most is when I get a message on a post from someone saying how they really needed that or that something spoke to them or saved their day or that it simply made them laugh out loud.  It makes me realize how rarely we say or “publish” something positive or kind or encouraging.  I find myself more and more often telling a stranger that I like their coat or shoes or they have a great smile or hair.  And it’s so fascinating to see their reaction.  I can feel how I’ve just changed their day.

Everyone wants to feel special in some way.  It makes me think I may start a Facebook page for people to simply drop a line about something or someone that is positive.  Even if you’ve found a product you like or you saw someone’s show and thought they were great or you met up with someone you haven’t seen for a while and they look wonderful.  But whether I do that or not, do it in your own life.  If you think something good about someone, say it to them.  It doesn’t cost you anything but what it gives you and them is immeasurable.  It fills the giver and receiver with such light and warmth.  No one loses.

I think that’s it for now.  You are all wonderful for riding my thought waves here on my blog.  I will try to report more of my adventures in the coming months.

4 Responses to “PETER PAN AND LIFE”