Hmmm  as I wrote the above title, I accidentally wrote “A NEW EAR” first and it made me think, “actually that is not inappropriate”.  I’m in New York, ready to start a new experience.  Well, many new experiences.  And I like the idea of a new ear, a new way to hear things, a better way of picking up signals.  Like an ear in music.  Hearing the natural way a melody should go.  I want to “hear” what the universe is actually telling me.  I feel a bit like I’ve been living the life beside my life for the last 32 years (how long I’ve been acting – in case anyone thought I was trying to pretend I’m 32).  I’ve had an amazing career.  Truly exciting and thrilling and filled with opportunities.  But I’ve always felt like I’ve been on a parallel path with my real life and its like the real life is on the other side of a very thin wall of rice paper – I can see the shadows, glimmers of the light but I don’t quite know what I’m looking at.

Well I feel so much closer to knowing now.  And being here in New York, I want some new adventures.  I want to make some things happen.  I’ve been an actor for 32 years and a  singer for about 26.  I want more than that now.  I want to write – what, I don’t know but I’ve felt for years that I might have something to say.  Whether I’m good or not or whether what I have to write is readable, no longer matters to me.  I used to write a lot as a young person but somewhere along the way, I convinced myself or let myself be convinced that I don’t have  right to do that.  I’m claiming that back.  I don’t know what I’m going to write.  Perhaps it’s just this blog.  But that’s not a bad thing.  One of the things that has made me realize I want to write is doing this blog.  It’s fun.  I like that I can write here and if someone wants to read it, they can.  If they don’t, c’est la vie, they don’t have to.

I realize as I say this that the blog has been very quiet for a while.  Well, I don’t know how to explain that.  Part of me feels like I want to say things that I perhaps shouldn’t say.  Part of me has felt like I couldn’t say what was really in my heart.  Perhaps part of me felt like if I started I’d never stop and that is a little daunting.  Now I feel like I need to just start telling a story and let it become what it becomes.  We’ll see.  I don’t what to limit it so I won’t decide what that is at this point.   I will just start writing and I feel like this blog is the beginning so if you are reading this, you may have just become a part of my history.  So I’ll say right here, “thank you for joining me on my journey because as of this moment, you become part of it as a reader.”

As for other things…. I think I said it in my last blog, I want another TV show.  I loved doing Over The Rainbow and I want to explore what else can happen when I’m being me in front of a camera.  So if anyone knows someone who needs a host or judge or whatever, hook a brother up.  (Notice there is no “LOL” because I’m not kidding – Papa want a TV show).  I’m going to explore those options a lot and figure out where I fit into all of that.

I guess I should catch you all up on my stuff.  Hmmm where to begin?  Guys and Dolls finished and was a mixed time.  In the name of good taste, I won’t go into the details but I will say I LOVE working at the Shaw Festival.  You won’t find a more generous group of people in the arts world.  Caring, fun, helpful, hard-working.  I loved my cast.  Our choreographer, Parker Esse, was a god-send.  Such style and skill combined with such warmth and caring.   He really gave the show a wonderful feel with his choreography.   The show had a great look.  But there was something involved in the production that was a challenge.  One that was overcome in many ways though not totally.  But I’m very happy to say it lead me to some life-altering decisions and clarifications about what I want to do which is a big part of what I was talking about in the above paragraphs.

I don’t like thinking about experiences as bad, only opportunities to grow.  If you CHOOSE to.  It’s all about choosing to clarify what you want in your life based on that experience.  Well I got very clear as I was walking around Niagara-on-the-Lake near the end of the season.  I have these walk/talks with the universe.  I just go out walking and chat – sometimes in my head, sometimes out loud – to the universe, asking for signs, using the universe as a sounding board to become clear about what I want.  I guess it’s a form of … ambulatory meditation. ( hahahahahaha Okay that made me laugh but I like it.  If anyone uses that phrase from here on, I want royalties.)  I want more control of my destiny.  I’m no longer content to have most of the decisions about my life left in the hands of someone else – re: auditions.  It’s not enough.  I want to have more of a creative hand in what happens to me and how I choose to express myself.   So, A New Ear really suits me fine.  I like it.

Anyway, after Shaw, I moved my stuff back to NYC  and had a little NYC vacation.  Saw some shows.  AFTER MIDNIGHT – amazing.  It’s a review, stylistically evoking the Cotton Club.  Fantastic singing, dancing and character acting.  And some other great shows I can’t remember right now.  Then back to Toronto to do two concerts.  One was the Sting concert, Uncovered: Sting & The Police, the fundraiser for Acting Up Stage.  Ten musical theatre performers interpreting the songs of Sting and the Police theatrically.  It was a crazy night.  I sang Seven Days (funny and manic)  and Mad About You (dark and brooding).  I may have gone a bit too theatrical.  When I finished my second number, the audience seemed too stunned to clap for a second.  hahaha ah well, go big or go home, right?! . . .. .. . . right…?  I was also thrilled and proud to be asked to be the guest performer at the first Toronto memorial for Harvey Milk, where I sang “Make Them Hear You” from Ragtime.  I was deeply honoured to be asked.

Then I did my big solo Christmas concert, SHUT UP, IT’S CHRISTMAS! at Metropolitan Community Church.  It was an amazing night.  It’s the 3rd time I’ve done the show and each time I refine it and make it better, more cohesive.  I’m very happy and shocked to say it was an amazing turn out.  A really full-ish house (the church holds about 5-600) and there were about 3-400 there.  And it went really well.  I started developing the show about 5 years ago.  The first act is me doing some of my favourite Christmas songs, then I have a guest who does about 20 minutes of whatever they’d like (Christmas themed of course).  The second act is me as Lola Cruikshank, better known as Mrs. Claus.    And she tells the story of her relationship with Santa from before they met until the present.  It’s been great fun and people seem to really enjoy it. It’s sort of becoming an annual show which I’d like to continue.  Here are a couple of shots so you can see Lola.  The first one is Lola (she usually has her hair up under the cap and her little old lady glasses on but this was after the show. 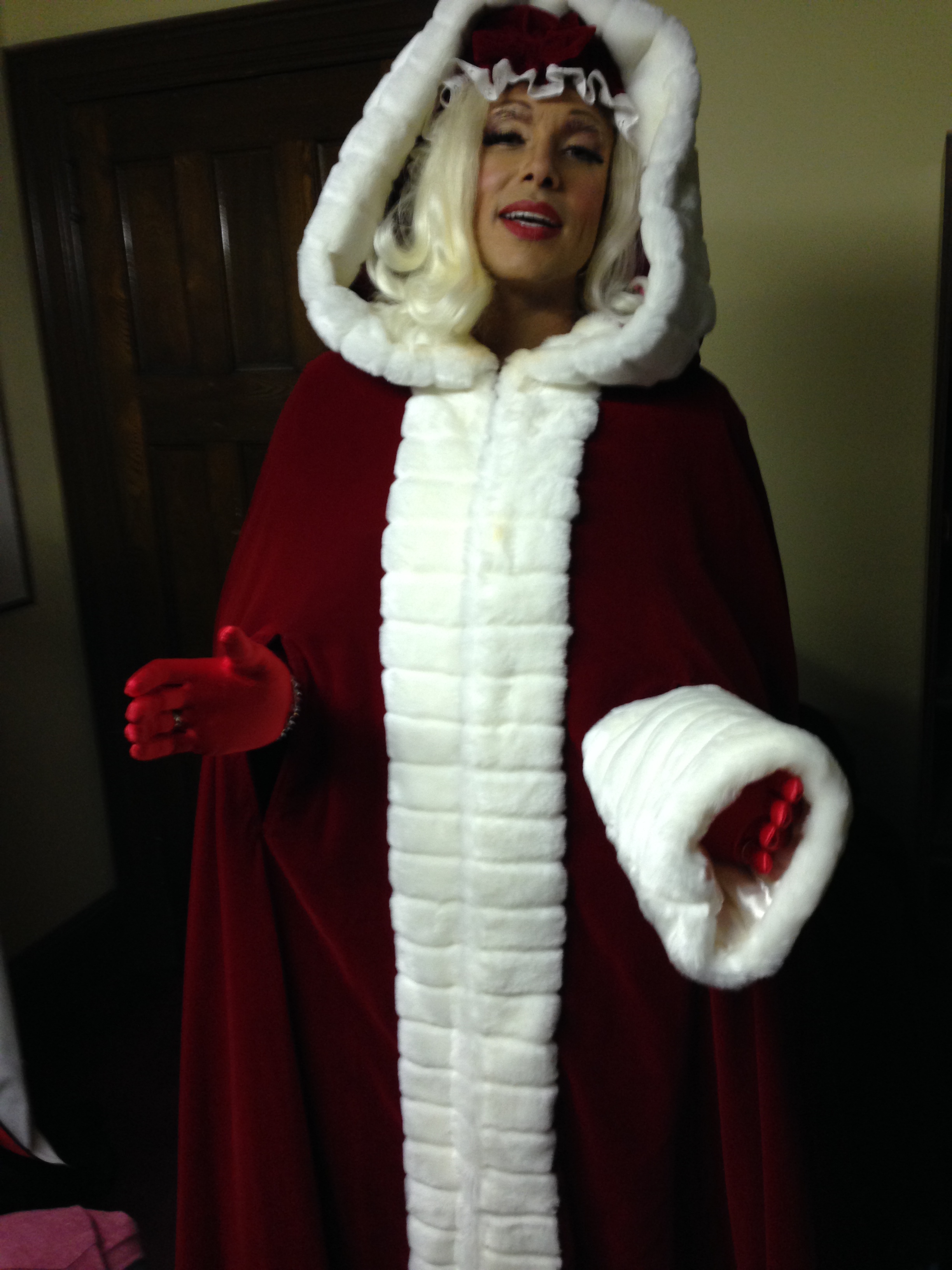 And at a certain point, Lola goes back in time and becomes her young self in her physical heyday. 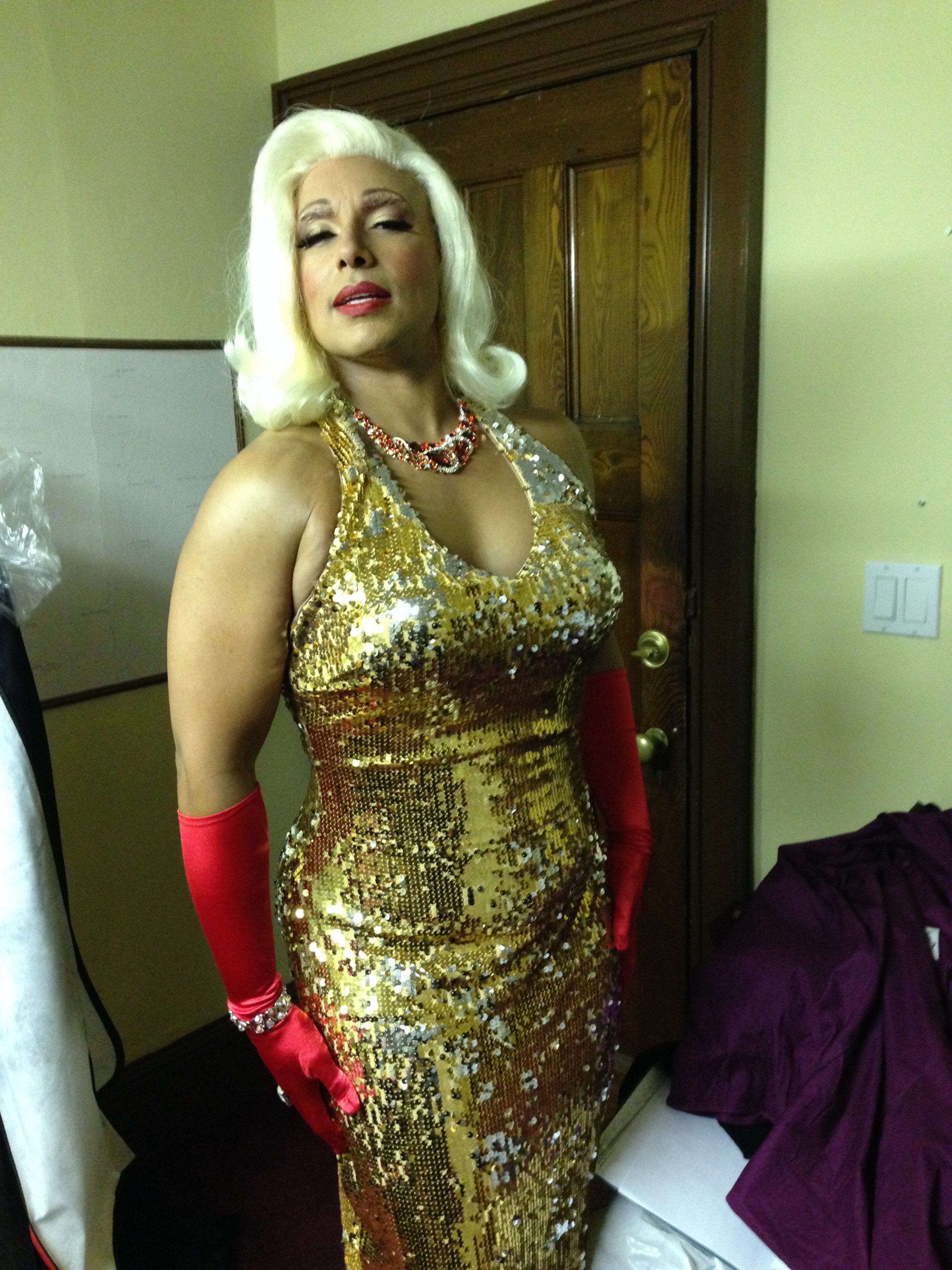 Except I’ve now realized that even though I love the second act surprise of Lola, if I switch the acts, I don’t need a guest to give me time to change. I can do Lola first, then take all the make up off and be me in the second act – just adding songs.  Anyway, it’s time to shop it around as a holiday show.

Then it was back to NYC where I had a December packed with people and Christmas and laughter and good times.  Lots of visitors.  Including my friend, Hannah from London.  Hannah is always game for some kookiness.  We were walking along the High Line when we spotted this interesting looking store. It’s called STORY. Check it out.  STORY It’s this great store that is like a magazine but it’s a store, they change the merchandise frequently, there are themes.  It’s so cool.  I got a great gift in here and, as you can see, Hannah and I had a very mature time. 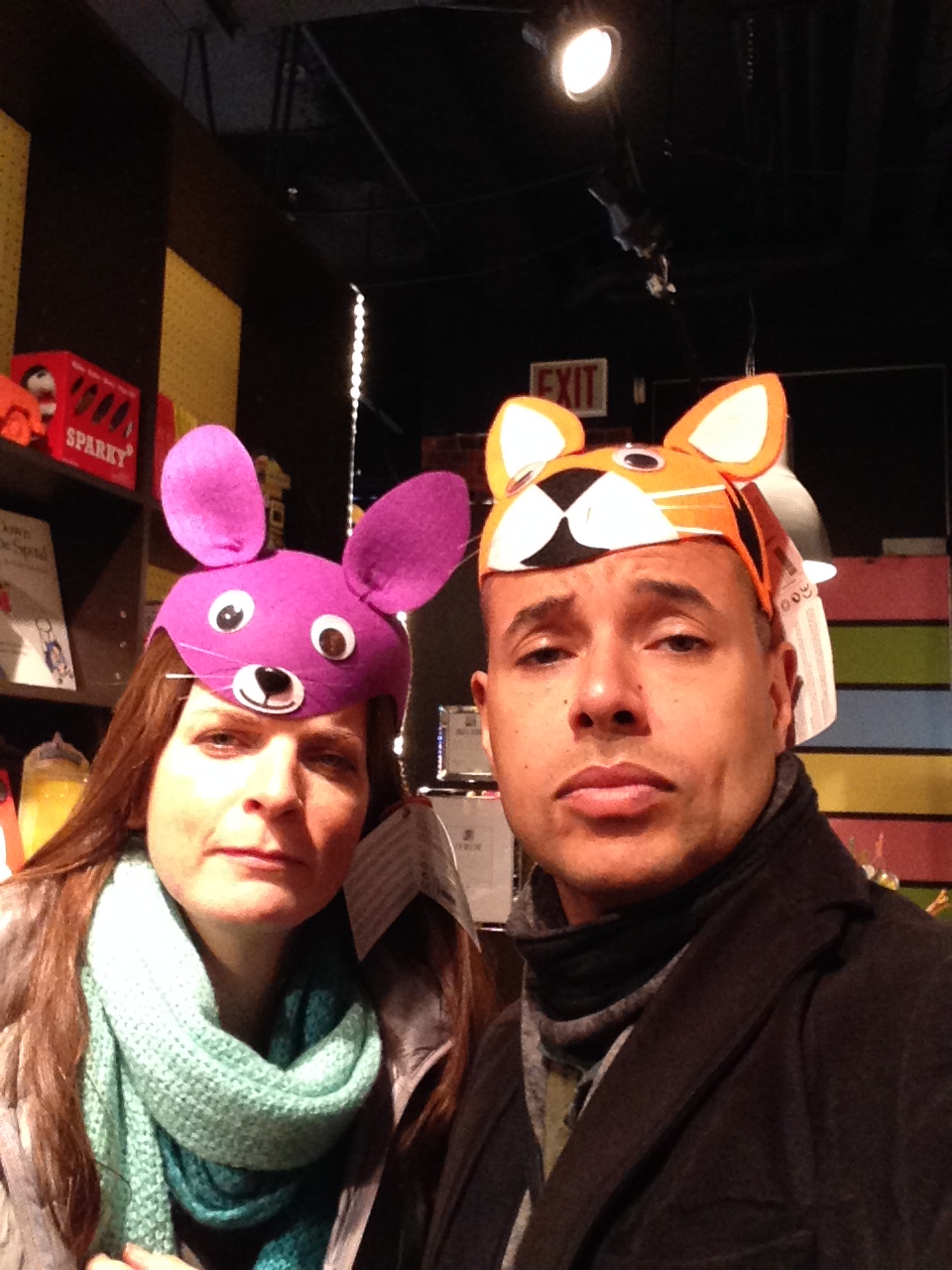 One of the great things I saw before I went back for Christmas is an amazing Christmas concert.  Though it was not just Christmas songs. 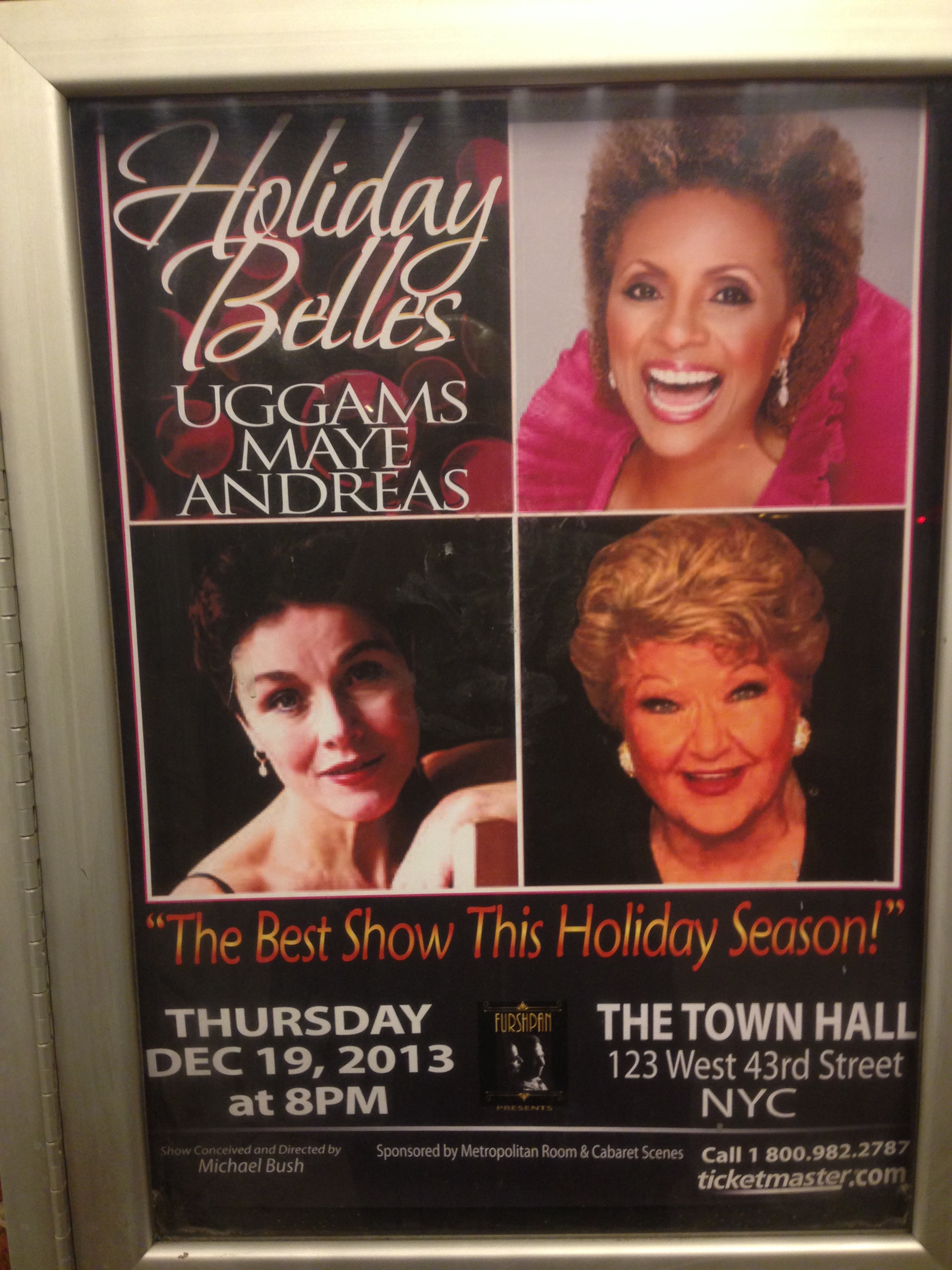 These three ladies really re-iterated what I believe great singing storytelling should be.  Each so different individually but each thrilling to watch and heavenly to listen to.  Marilyn Maye was first and had such a great voice – like burnished copper – warm and familiar with such power . . . and she’s in her 80’s.  What?!?!   Then Christine Andreas giving you this crystalline voice, tinkling like a chandelier and the complicated musical sensibility of a singer of French art songs.  Then the second act was the great Leslie Uggams.  70 years old and her voice completely, and I mean completely, unchanged from when she was 24.  So easy, and comfortable.  That ringing vibrato, telling us with every skyward spin that to dream is to live.  It was a night of inspiration and magic that sent everyone out into the winter night with joy in their hearts and a smile on their lips.

Back to Toronto for a wonderful Christmas filled with soooo much food (I think I need to go on a cleanse) and friends and laughter and warmth and music and great love.  It could not have been more wonderful.

Which brings us back to here and now.  In my New York apartment, writing some thoughts and hopes and dreams.  Hoping to be guided to the next part of my path. Want to be still finally and listen to what my heart is saying.  A new ear indeed.