Well . . . . that’s done.  hahahaahhahahaahahahahahahhahaahahahahahaaha It was a crazy, bizarre, exhilarating, fun, heady, scary, sobering, informative, amazing evening.  Well it wasn’t an evening.  It was a whole freaking day.  I started at 10:30 am and I was packed up and out by about 11:15 pm-ish.  And I basically stopped doing stuff for about 45 minutes in total for the whole day.

When I got there, we had to go through the order of the jackets to see what I’d where and when.  I had already thought it out, cause that’s the kind of guy I am.  Then I was called to the stage to do a mic check which lasted about 15 minutes.  After which, Chris Earle, the amazing writer of the show, Sandra, our director and myself started walking through the script to make sure we all had the correct changes and to talk about any thoughts of changes any of us might have had.  I had been going over and over the script and I had some thoughts of add-ons that we had sort of talked about at a previous meeting.  And Chris had some other suggestions too.  So we decided on stuff that made us laugh the most but that wouldn’t insult too many people.  🙂

Then there was some lunch of which I had a bit for about 25 minutes then I went back to my dressing room to keep learning some of the new bits.  After the lunch break (around 1) we went on stage and worked on the choreography for the opening number with the 21 BACK-UP DANCERS.  That’s right, I wrote 21 backups dancers.

Once we got kicked off the stage around 2:30, we retired to my dressing room and we continued on through the script to incorporate any changes.  Then he left me to look through some stuff on my own.  At this point (around 3:30), I was . . . . “visited” by about 30 times from 3:30 till about 4:45.  Stage managers, wardrobe, etc. who needed to know important things.  Seriously they were important things.  We were trying to make sure I had all the changed printed out and what needed to be on little cue cards hidden in my pockets and which needed to be in my binder on the podium, checking to see if I could do an interview at 5:10 across the street in front of the Sony Centre (where the pre-party was happening though I wouldn’t be able to go), making sure I could be in my tux for the interview, did I want something other than water with my dinner, and on and on.  I also wanted to make sure I set up my make-up and jewelry in the quick-change booth upstairs for the last appearance which I did.  But all this meant I didn’t get a lot of “studying” done.  Then when I sat down to look at my stuff at 4:30, at 4:45, a knock came at the door; they wanted me to come to the stage to go through the awards I will be giving out with Michael Rubinoff.  But I was supposed to be ready in my tux by 4:55.

So I went up and did the bit with Michael, then ran down to get into my tux in time to get told to head upstairs and outside to get a group photo done, which was lovely.  Then the publicity person grabbed me to take me right across the street to the Sony Centre where the interviewer was there to tell me we would be about 3 minutes. Did the interview which lasted about 2 minutes then back to the theatre to get out of my tux and back into my rehearsal garb.  Just as I finish changing, I see the choreographer walk by on her way to a final run-through of the opening number with the kids.  So I tag along – any chance to run it is a good thing – then back to the dressing room.

By now it’s about 5:25 and I sit down and am able to organize a bit for about 10 minutes when Chris is at the door  wondering if I want to go through the monologue.  I tell him that I’ve literally had about 20 minutes total to actually look at it.  So he tells me to grab him when I’m ready.  So I look through the opening for about 30 minutes then find Chris.  We find a space and sit down and go through the monologue and the other bits for about 5o minutes.  We make some more changes.  (Yeesh) By this point, it’s 7:00.  So it’s time for me to grab some alone time.  I go and get my salad for dinner and go to my dressing room.  I figure I’ll nibble while I start to get into make-up.  And that’s what I do.  I put on some jazz (music of choice) and start to just nibble and breath and paint. While I’m doing this, I’m getting the odd knock and “break a leg” through the door along with the calls (“half hour”, “15 minutes”, “this is your 5”).

At about the 15, I get into my tux – Tails to be exact – and run through the song and choreography.  When I get my 5 minute call, I suddenly get the feeling that I cannot possibly know the song and/or the monologue enough and I don’t even know which one to go through again first.  And then comes “what was I thinking saying yes to this”.  Then comes the resigning myself to the fact that I’m actually doing this and I can’t back out now.  So I head up to the stage to do a pre-check – THANK GOD – because in checking my onstage binder, I realize we have put the first page, which we had to add due to a misunderstanding, in the back of the binder. So after my monologue, I would have come up to the podium and had no introduction for our first presenters.

Now understand that I believe in little signs.  I always feel the universe has a kooky sense of humour and that felt like it was a message to be on your toes because anything can happen and also a message to roll with whatever it is.  You can’t die, you can only make a joke out of it and move along.  Nothing delights an audience more than honesty. With that I sort of calmed down and decided that whatever happens, all I need to do is breathe and role with it.

And then as I stood in the wings ready to make my first entrance, the mike tape came off of my neck behind my ear and there was no time to fix it.  Luckily it was stuck on enough in front of my ear to not be worried but I started laughing out loud.  And then I was introduced and the music started.

MY GOD!!!!  I actually remembered all the words and choreography for the opening number.  HOLY DOODLE!   And then I got about 3 sentences into the monologue and forgot my words.  And I couldn’t think of what to say next. I finally remembered my own advice and just made a joke of the truth that I couldn’t remember my next line.  They laughed  . . . I took a breath . . . and the line came.  Then on I went with no repeat mishaps.  Got some nice laughs, some applause here and there and the feeling seemed to be a pretty good one through the night.  I did manage to stumble on at least one word in every speech I had that night.  But I figured if that was the worst that can happen, let the judgers judge.  I’m the one asked to host, not them.  No one will remember my blunders and everyone will remember their bitchy comments.  Pppbbssstttt!!!!

In terms of costumes, as I said – jackets.  I wore a basic tux and changed the jackets with every entrance – about 10 or 11. Then for the final moment of the show, I was in full drag.  I walked out very slowly and then said, “I ran out of jackets.”  That was my idea and I’m very proud and happy with the response.  It went just as I hoped it would.

All in all, I have to say I think I had as much fun as one could have in that situation.  It’s so crazy.  But thank you to Jacoba Knappen and Sandra LeFrancois (insert cute symbol below the “c”) at TAPA – Toronto Alliance for the Performing Arts – for asking me to do it, Sandra LeFrancois for directing me and letting me say some ridiculous things even though I’m sure she thought I was just crazy, Erin Schachter for the fun and delicious choreography and the amazing Chris Earle for writing me such funny stuff and being so open to my adjusting and adding my own funny stuff.  I thought we worked really well together and I had a great time with him.

And even larger than that, the Toronto theatre community welcomed me with such open arms last night.  They made me feel welcome and loved and funny and capable of not sucking doing this horrifying job (of hosting).  I will walk away from this incredibly unique experience with really good memories  . . . and only a few emotional scars.  Hey! The good stuff costs.  Congrats to all the winners last night and Bravo Toronto Theatre.

Oh and here is a shot of me in the last outfit with the writer, Chris Earle. 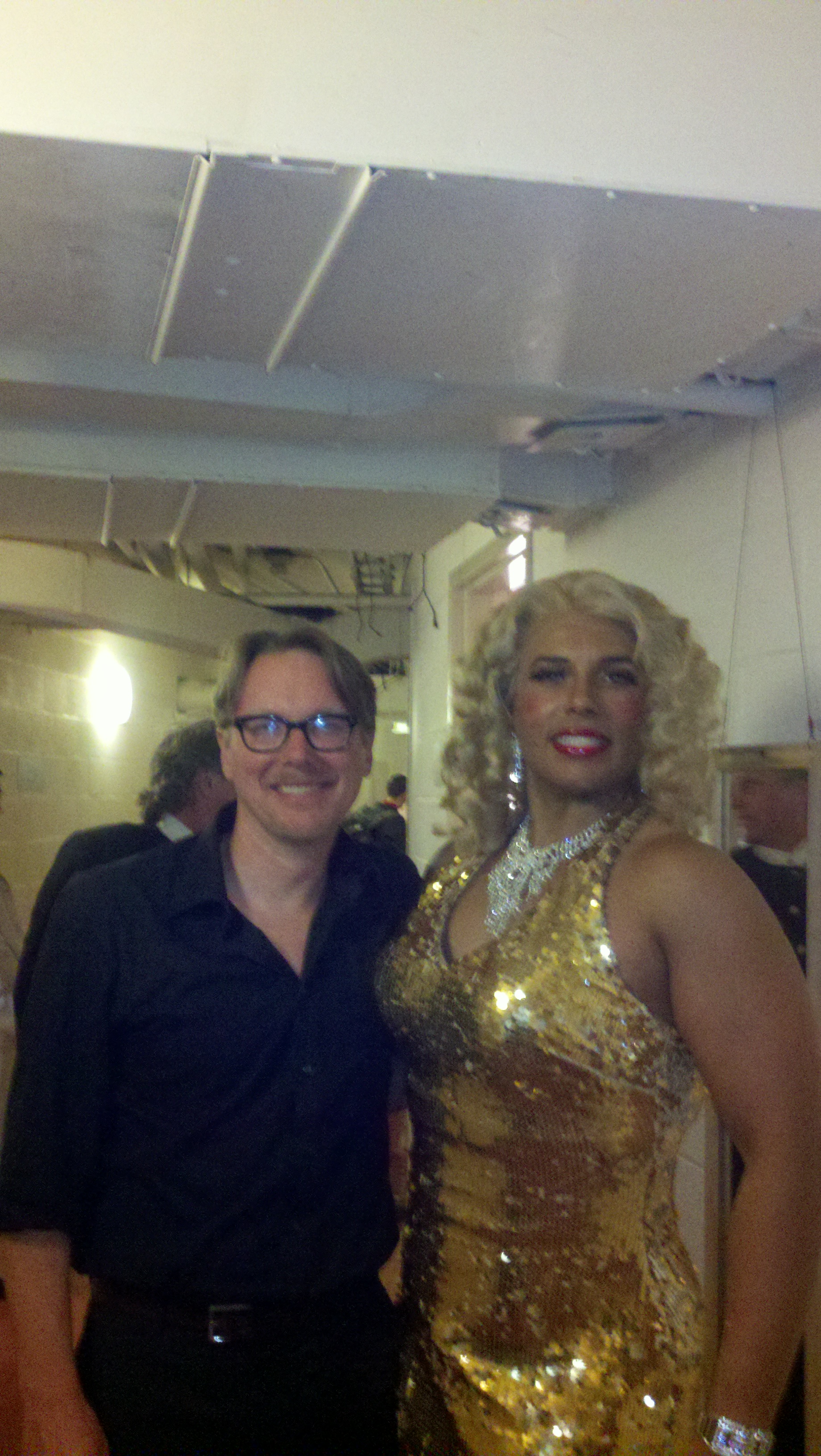